A week and a half ago Gavin went in for a sedated heart echo, and to have his pacemaker read. I usually get nervous before these visits...I spend time wondering if we will get good, or not so good results. After we got home, the boys were asking me how it went, and then Nolan and Caleb started reminiscing about the days that Gavin spent a lot of time in the hospital.

They were remembering out loud what they thought about those days. They kept asking me questions about why Gavin was in the hospital so often, and just how bad his health was back then.

During those days, it was difficult for me to grasp just how our other boys were doing during those trying times. They seemed to be doing well at the time.....but you never know how much children grasp, and what things they may be worrying about, or not worrying about.

Gavin's 1st couple years of life were very fragile. He was in and out of hospitals, and was a very sick little guy. He had to go through a whole lot in those days! 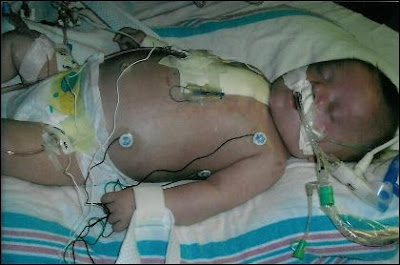 Doctors were always very pessimistic about his outcome for living long. It was an extremely difficult time for us as a family! We were separated so often....with me and Gavin spending time in the hospital, and Joel trying to juggle work and children, and our other boys going from one grandma's house....to the other. I felt so torn between being there for Gavin, and being there for the rest of the family. It was a long, long road! In fact, Gavin spent 4 1/2 months straight for one of his stints in the hospital.....from Dec 26th to May 12th. (Most of this hospitalization being at a hospital 2 hours from our home.) When I think back to these days, I wonder how we managed the uncertainty, the separation from each other, the worrying, the stress, the pain. It was very hard! But, by the grace and strength of God....we made it through! Maybe even leaving us stronger than before, and definitely leaving us reaching for God at a greater frequency!

Nolan was communicating to me last week, that he never knew Gavin was as sick as he was. He was asking me about how serious Gavin's situation was back then. So...I started sharing more with him. Like, how one doctor told me that "You will probably never bring your son home." I remember that day so vividly. Gavin had just suffered a hypoxic brain injury.....at the fault of doctors that he was under the care of! His heart was in serious condition, his lungs were a mess, and he had just started having seizures due to the brain injury. I was a wreck! But, I had enough faith to trust that God was bigger than this situation, and that only He knew the plan for Gavin. So, I told that doctor, "I WILL be taking my boy home, and I will love him and care for him, and he will live!" I even told the doctor that I would "do a better job than they were doing, since they were obviously doing a poor job of taking care of him!" (I was very distraught over the fact that Gavin suffered a stroke due to errors they had made!) Obviously, I did not know if Gavin would ever come home with me, but I NEEDED to believe that he would at that very moment! Thankfully, God's plan was on track with mine! PTL!!!

When Caleb was remembering back to those days, he told me that he just thought babies spent a long time in the hospital! : ) Ahhh.....to have the innocence of a young child! : ) He said he loved going to visit Gavin in the hospital! He only remembered the fun parts of it all. This gives me comfort, knowing his young mind wasn't boggled down with worry and heartache. He also told me that when my sister had her son a couple of years ago, he was so surprised that Tate came home from the hospital so quickly, because he thought being in the hospital for weeks was the norm. Thankfully this isn't the case for most babies....but unfortunately it is the case for some families.....and it is truly a heartwrenching time!

By the way, Jake says he also remembers the hospital days positively. He says it was always fun to go to the hospital to see Gavin. I know it was harder on him, since he was older than his brothers, but I'm very relieved knowing there doesn't seem to be any long term effects from those hectic and worrisome days.

Fast forward to a couple of weeks ago:

Gavin went in for his heart check up. Keep in mind that his heart is still severely damaged. He wasn't "supposed" to do this well. His Mitral valve is still leaking a ton, and he was "supposed" to have needed a valve replacement years ago. Guess what?! God's plans were different than doctors' plans! And, we are so thankful and blessed by this fact!

Here is Gavin after they placed an I.V. to put him to sleep for his echo. He looks like he's thinking, "What the heck did they put in my arm?!" He didn't even cry for the placement! He is such a brave, good boy! (Unless you you are giving him a bath! He still thinks we are killing him during this process! Crazy boy!) 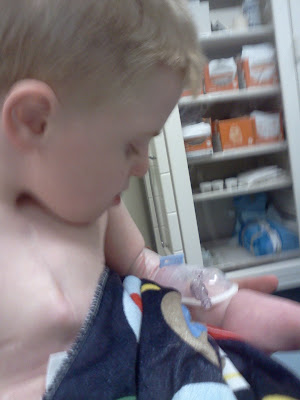 Here he is after he was asleep, during the echo. They let me hold him while they put the medicine in the I.V. for sedation. It is quite scary to watch and feel your child go from wide awake and moving....to out cold and limp, in seconds flat! 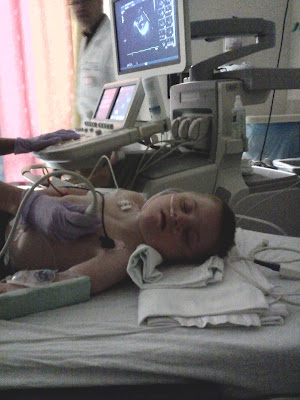 I hate that Gavin has to go through more than the typical child.....but he does it with such grace! He makes me feel so proud of him! He is a true inspiration to me.....I love him so much!

We ended up getting great results too! Gavin's heart function is good despite the significant valve leak. There are no longer any holes detected in the heart. His pacemaker is only having to fire about 8% of the time, and there is a 6-24 month battery life left on it. We have to go back in during the summer for further testing, and we know that he will need surgery to replace the battery and the leads on the heart someday....but otherwise his heart is tolerating his body's needs quite well! What a blessing! 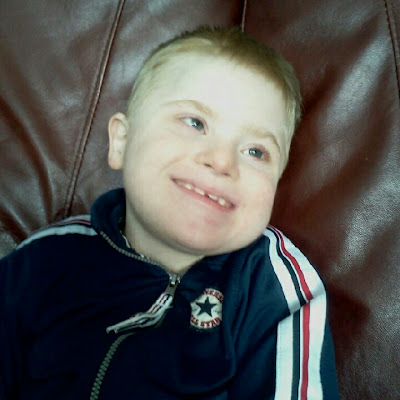 Gavin's life may have started out very rough, but when I think back to "then"....and when I think about "now", I am amazed by the grace God has supplied our family! Not only did we get to bring our boy home, we have even seen him flourish in our home! Don't get me wrong, life isn't very easy on him....and days aren't exactly easy caring for him either! He is a 35 pound six year old, who can't even sit up on his own.....which makes dressing him and carrying him around quite strenuous. He can't eat by mouth, and is only fed by a gastric tube. Plus, he takes many meds and nebs per day. We have many doctor's visits for him, and we worry about him getting sick due to his already compromised health. He can't tell us how he's feeling or what he wants....his mind and body are functioning like that of a 4-9 month old. BUT.....he is alive, he is home with us, he is such a happy boy, and he is a wonderful blessing from the Lord!


"Indeed we count them blessed who endure. You have heard of the perseverance of Job and seen the end intended by the Lord — that the Lord is very compassionate and merciful." James 5:11
Posted by The VW's at 3:54 PM 8 comments: