Here are some pictures of Gavin at school today. He practiced his head lifts, bounced on a ball, played with toys and beads, and sang songs! 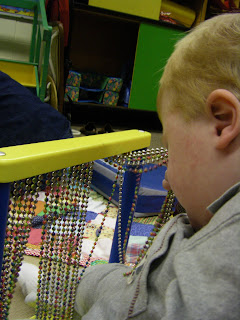 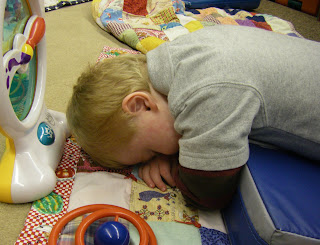 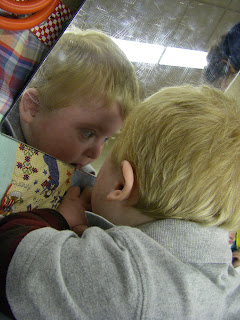 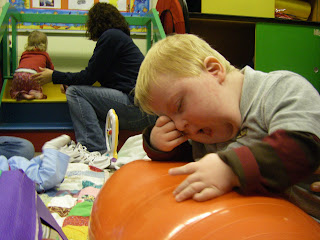 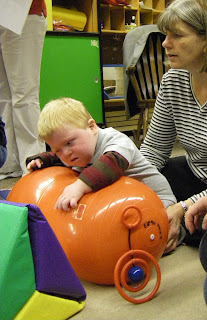 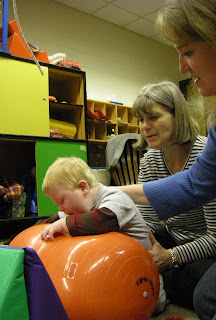 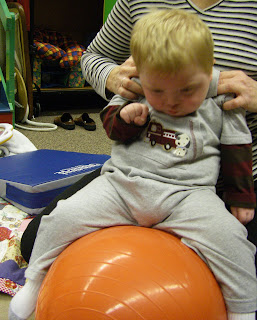 He hasn't exactly been enjoying school the last couple of times that we went, but today he was really happy to be there and seemed to enjoy himself. He was the loud mouth of the group today and had a lot to say! At the end of the class he is usually sleeping, but today he made it all the way through.

I know that I expressed my concerns about even going to this class, but I think it will benefit him a little. He is not as advanced as most of the other children, but it hasn't bothered me as much as I thought it would. So, I'm thankful for this! The first 2 classes that we went to he wasn't sure about the whole thing. He didn't like all the noise of the other babies crying, which made him cry! And, he wasn't impressed with some of the things that they made him do, but I think he's starting to accept the idea.

Gavin's cardiology appointment went well! Yay! The doctor said that he was doing well and no changes were needed! He doesn't need to see us back for another 6 months! I'm very relieved with the news that everything looked good! Whew!

Gavin continues to have a guncky cough, but it's clearing up a little. For a couple of days his O2 saturations were lower than his norm and his lungs sounded weezy, but he's coming around and has managed to stay out of the hospital! Another thing to celebrate! I'm beginning to think that I might just be able to relax again! Almost a year of no hospital stays! Yahoo!

Thanks for keeping up with Gavin and for all the support and prayers that we've received! We have so much to be thankful for!


"Enter His gates with thanksgiving, and into His courts with praise. Be thankful to Him, and bless His name." Psalm 100:4
Posted by The VW's at 2:47 PM

He does look a little grumpy in a couple of those photos! So glad school is going well.

So glad to hear about his cardio appt! That is great.
That shoulder rub thing they are doing to him, makes Alex soooo mad.

Thank you, God, that Gavin's health is doing so well. I bet you never thought you would hear that you didn't need to bring him in for 6 months! What a praise!

This little guy is going to do so much! What an adventure!

Great news from the cardiologist and staying out of the hospital! School looks exhausting! No wonder he slept. I'm glad he's coming around to accept the idea. I'm sure he will benefit from going there.
See you tomorrow!
Love,
Julie

Gavin is so cute. He looks like he is doing better.

Too cute! He is just adorable:) It's nice to see him having fun! That class looks awesome!

Goodness me Gavin, that is a major obstacle course you were jumping around in there! Like I've said before, you certainly look like a candidate for the Olympics! And look at that determination on your gorgeous little face!

The Bernard Bunch is VERY impressed! Keep up the good work, Champion!!!