Playing with my toys in my new seat! 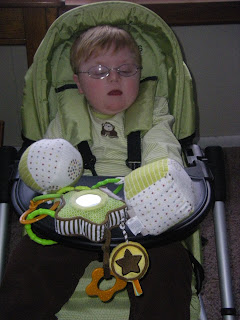 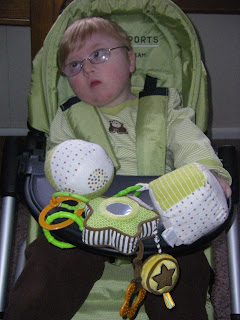 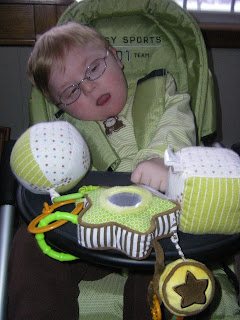 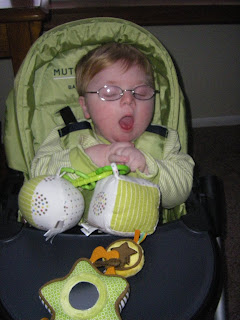 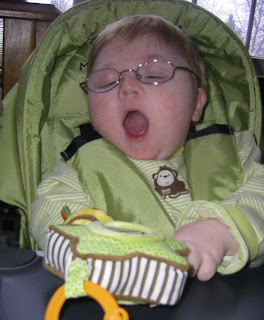 For the LONGEST time, Gavin would just lay around and was not capable of playing with anything. It is so nice to watch him grab for his toys and seem to enjoy playing with them! He has a LONG way to go, and yet he has come so far!

This seat is actually a stroller seat that removes from his stroller frame and has a base to hook into for in the house. It's quite an awesome invention if you ask me! Since he isn't able to sit up on his own, it's great to have something like this that we can strap him into so that he can sit up, play and look around in! It's so hard to feel like I'm stimulating him enough, since he isn't able to sit or really play by himself. He struggles so hard just to grab for a toy, but he is definitely trying harder lately! We move him from place to place all day long trying to keep him as active and stimulated as we can, in between snuggle time, of course! :)

His physical therapist has been bringing in lots of new toys and contraptions lately, so hopefully he's enjoying himself! I'll share more pictures of him later doing PT. He's even going to try out a stander for the first time in the next couple of weeks! We are excited about this! Hopefully Gavin will be as excited as we are about trying this out!

Have I mentioned how much I love this little man?! 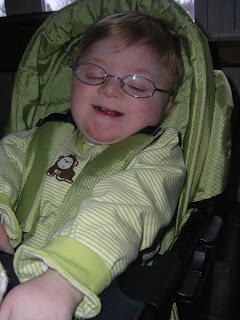 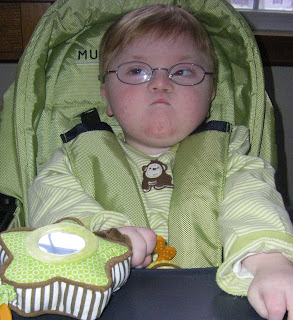 "Let the words of my mouth and the meditation of my heart be acceptable in Your sight, O Lord, my strength and my Redeemer." Psalm 19:14
Posted by The VW's at 10:44 AM

Hey where did you get that seat? Its so hard finding stuff to help them sit up when they are getting to big for the baby seats. Thank you so much for the stuff, its so funny jax has gotten a lot of girafes so its kind of his new thing. I will be finishing your blankie when I'm sitting in the hospital with Jax, Have a good day, Lacey and Jax

Go Gavin! You are amazing, and so cute. I love the last picture!
Where did you get that stroller?

What a fabulous young man you have there! I LOVE all those mischievous little expressions you have captured on camera.

Oh so cute. I love Gavin's new chair and toys. I like green.

Look at his gorgeous smile! And reaching?! Go Gavin!!

Alicia,
Just wanted to let you know the highchair is EvenFlo Expressions. It also says Easy Fold on the legs so don't know if that is part of the name also. It is not expensive and we got at Babies R Us. Our therapist thought it was important that her feet rested on the footrest of the highchair. It is hard to find one that Annabel's feet reached. It does have a couple reclining positions. It allows me to feed her solids upright and then can also recline a little for tube feeds. I love Gavin's new chair. Did you dress him to match? I bet you do love this little man. He is so cute. annabel is not always interested in grasping for toys. She loves to play with her pacifier and that is about it. Her hands are so small so hard to hold anything. Sometimes I shop for her toys at Build A Bear or doll stores. Blessings to your precious family.

Gavin looks so cute in green! (It must be the red hair.) And I love your winter photo show--I hadn't seen it yet!

Ohhhh! Look at those teeth-ers! SO cute! I love how happy Mr. Gavin looks in his new chair; it's great that he's getting more - and new - interactions this way. Can't wait to hear how he does in his stander. GO, Gavin, GO! :o)

Love you all so much! Watching the Winter slideshow just made me miss you all even more than I already did. *sigh* (((HUGS)))

He is so cute!! I love ll the different expressions!

He is soooo cute! What a great invention, a stroller seat that works in the house too. Aren't strollers just amazing with all their extras?

I'm emailing you today, what a wonderful friend you are!

How could anyone not fall in love with this little man? He's adorable!

Gavin - your new chair looks awsome. You look very grown up and handsome in it! Keep up the great work!!
Love,
Julie