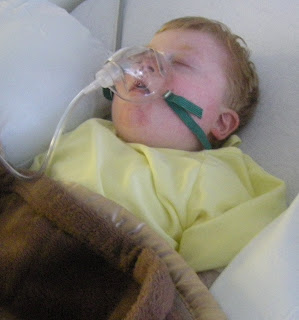 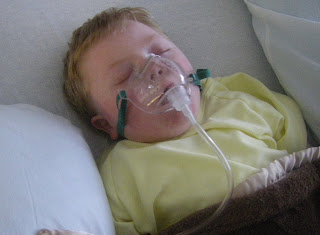 Gavin's cold has found him in the hospital again! He progressively got worse over the weekend, so I took him into E.R. this morning. He actually got worse while we were in E.R., so I guess it's a good thing that I brought him in when I did. I think that he made himself get worse when he heard that they were going to admit him to stay. He decided that if he had to stay he better get real sick so that they would put him in Pediatric Intensive Care Unit, instead of being put in a room on the regular floor. He knows that you get more one-on-one attention in ICU, so he dropped his oxygen sats real fast so that he could earn a trip to the more exclusive floor! I'm actually happy about this. If we have to be in the hospital, the ICU is a much better place to be. Gavin knows what's best!

Pray that they can figure out what is wrong. Right now they think it could be a number of things. (pneumonia, RSV, bronchitis, pertusis or none of the above.) I'm hoping that it's something bacterial, that way antibiotics will help to get him well and home again faster. He is struggling to breathe and is on about 4 liters of oxygen right now. Pray that he doesn't get any worse and that he begins to feel better soon. Right now he feels and acts miserable and it's breaking my heart! Thanks for your prayers!


"Is anyone among you suffering? Let him pray. Is anyone cheerful? Let him sing psalms. Confess your trespasses to one another, and pray for one another, that you may be healed. The effective, fervent prayer of righteous man avails much." James 5:13&16
Posted by The VW's at 10:33 PM

Alicia & Joel, so sorry to hear Gavin was admitted. We pray it is a short stay and he gets well soon. If you need anything, bringing and picking up from school or taking Caleb on his days off PLEASE let us know. Get well soon Gavin!!!! Love The Hilton's

Dang it! I was hoping and praying for no hospitals. Well, at least he made sure, that without a doubt, you knew that is where he needed to go! I am glad you were able to get to PICU. Always better than the regular floor.

I'm sorry to hear that you are in the hospital. I hope that Gavin gets better soon so you can get back home!

As a sidenote, I totally agree with you about the PICU versus the regular floor. Much better nursing and attention!

I hope you're home lickety-split.

I can't tell you how sorry I am to read that you are in the hospital. I know it's a hard place to be, even though it's a safe place and a relief if you are worried about your boy. I'm just going to pray for a quick recovery and a chance to go back home SOON. SERIOUSLY PRAYING!

I can't tell you how sorry I am to read that you are in the hospital. I know it's a hard place to be, even though it's a safe place and a relief if you are worried about your boy. I'm just going to pray for a quick recovery and a chance to go back home SOON. SERIOUSLY PRAYING!

oh sweet friend! I am so sorry that our little man is not doing well. Please know I will be praying!!! Call me if you need to talk, cry or just get it out! I am hear for you!! Sweet boy looks so sleepy! Jesus, I want to life our little man up to you now Lord, I pray that you would give the doctors wisdom and guide them through the process of tests and revel to them what they need to do for your child. We trust in You Lord, You are in control and please shed your mercy and grace and tenderness around Alicia and her family. Give them strength to tarry on as they wait. Wrap your loving kindness and peace around Alicia's heart and I pray you put a hedge of protection around little Gavin, please Lord boost his little immune system that he may not get any other sickness while in the hospital. Please give my sweet friend a hug for me!!! We love you Lord and thank you for Gavin's life and all that you have shown us through him, we pray that you continue to use his life story for your glory!!! In your precious name, Jesus ~ Amen!!!! I love you Alicia!!!!

I hope it is something that they can treat easily and get Gavin healthy as soon as possible! 4 liters is a lot little man!

Get better soon, and God Bless.

Alicia, I saw the title of your post on my blog, and my heart sank. I am so sorry, you and gavin are in the hospital. I am glad you are in the PICU.
My heart is hurting for you, as you just sit there, and wait.
I so wish I could drive up there and sit with you.
Feel surrounded by us moms.....LOVE YOU, LOVE YOU, LOVE YOU!!!!

We'll be praying for Gavin--and all of you. I'm thankful that he's in a good place where he can get good care.

Poor little guy. I hope he feels better fast! Give him a hug from us.

Praying that Gavin is well soon & back home with you. Take care little guy! Love you.

I found your blogspot through Jaxson. I will continue to stop in and check on Gavin. I hope he gets out of the hospital soon and they figure out what's wrong with him!

Prayers are being sent your way!
Hugs - Tiffany

Oh I was so hoping that he wouldn't have to be admitted!! I am so glad that he's in PICU though, that's where we prefer Addysen to be too but she stayed on the regular floor last month. I pray that little Gavin gets stronger and stronger and meds will kick this ick out of him!

So many people who love precious little Gavin are praying that his health condition takes an upward turn so that he can come back home a.s.a.p to his Mommy, Daddy and fine brothers.
I want to share a very nice prayer written by Helen Steiner Rice..

On the wings of prayer
our Burdens take flight
And our load of care
becomes bearably light..
And our heavy hearts
are lifted above
To be healed by the balm
of God's wonderful love..
And the tears in our eyes
are dried by the hands
Of a loving Father
who understands
All of our problems,
our fears and despair..
When we take them to Him
on the wings of prayer!

Psalm 31:24 - Be of good courage, and he shall strengthen your heart, all ye that hope in the Lord.

I love you all so very much.

Oh no! I am so sorry to hear you guys are in patient! I will be praying along with you that it's one antibiotics can fix. My heart breaks to read that he's having trouble breathing and not feeling well. We're thinking of you guys, and praying that Gavin is home soon.

Alicia and Family.. I am thankful that Gavin is in the hospital. I know it is hard on you to be there with all the past experiences. We know he's in the best hands of all - God!!!
I told Joel to please let me know when I can help with the boys or whatever is needed.
I'll be waiting to hear from you.

You are all in my thoughts and prayers!

It was great talking with you yesterday even though it was from Gavin's hospital room. I'm glad he's in good hands in the ICU and hope he will be home very soon. Hang in there sweet boy!

What the heck is going on???Another one of our little ones sick. Sweet,sweet boy.Praying for answers.Praying for home and praying for ... spring!!!

Oh dear, I am so sorry. I know how little you like these stays in hospital too. We are thinking of you and your gorgeous little boy ... and looking forward to the good news that he is bright eyed and bushy tailed again and warm and cozy at home.
Take care
Alison

I am so sorry he is back in the hospital. You are all in my thoughts and I hope Gavin is feeling better and back home as soon as possible!