I've told you before, I don't like water, thank you very much!

I think that I may have mentioned it before, but Gavin does NOT like to be near or in water! He is a very easy-going boy, but if you give him a bath...watch out! He has a fit and doesn't forgive you for about 30 minutes afterwards! He sometimes even starts to cry or complain if I am holding him and I just turn on the sink! Just the sound of water sets him off!

This makes bathtime so difficult at our house! I feel so bad for him and I get quite the workout trying to control him while also washing him up. It is not fun and he and I both dread bathtime!

My goal for the summer is to get him to tolerate water a little better. I'm hoping that he will even like it someday, but for now I'm just hoping for him to tolerate it. I plan on getting him wet a lot this summer! SHH, don't tell Gavin!

The other day it was about 97 degrees out, so I filled up his little pool and let the water warm up some. Then, I started by putting his feet in the pool. 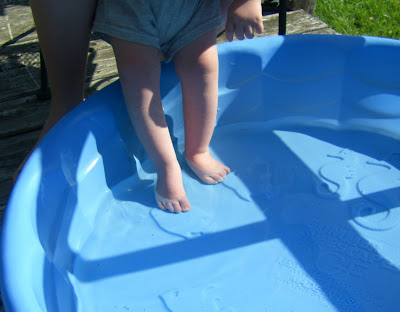 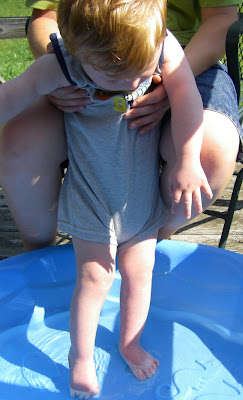 Surprisingly, he tolerated this very well! Maybe because it was SO HOT out!!!

Next, I took off his clothes and sat him in the pool with his diaper on. He even tolerated this fairly well! 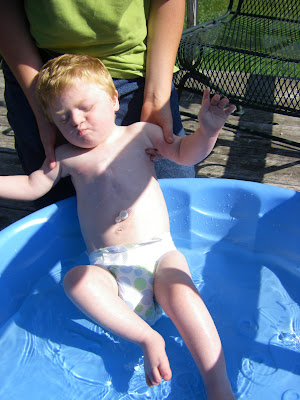 Since he was doing so well with the water thing, I decided to give him his bath in the pool! 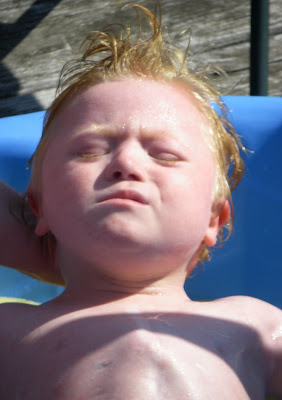 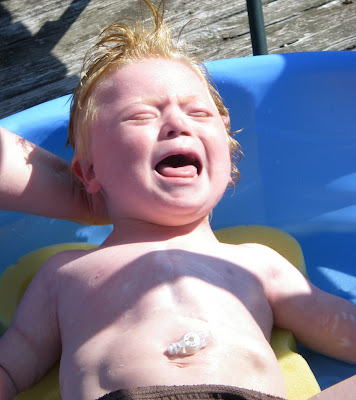 I guess that I pushed my luck! But, he did do better in his pool than he does in the sink or bathtub!

I can only remember one time that Gavin ever liked being in water. We were staying at a hotel with a lukewarm hot tub, so I took him in with me. He didn't cry at all. So, I'm thinking that he might do better if he is being held in water??? We just bought a pool from the bargain corner. (Well, actually the guy was willing to give it to us for free, if we took it down! This is a huge job and Joel is NOT thrilled about it, but I told him, "It's for Gavin!" :) Plus, the boys and I will love it too! We just need to figure out how to install it at our house and buy a new liner for it!) Anyway, I am hoping that once we get it up and the water warms up a little, that Gavin will get used to the idea of water and hopefully like it while being held by me.

I've been told that children with Down syndrome usually love water and swimming. I guess Gavin didn't get to read that memo! Oh well, I'm not giving up! Hopefully by the end of the summer I'll be updating you on how much he loves to be in the pool.....I am surely not going to hold my breath though!

Do any of you have ideas on how to get a boy with such a waterphobia to like it? Please let me know if you do! Because, pretty soon I might just give up bathing Gavin! Between his not liking baths and his not being able to sit up for them, it just wears me out too much!

That sad face is almost too much to bear!! Poor little guy... Good luck with your goal to get Gavin to like the water. I hear practice makes perfect... ;o)

Just keep exposing him, the pool seems to be the place to keep trying. With Alex I have learned that repetition is key, even if it takes weeks, I bet hell come around!

Jax doens't mind the water at all. As long as its warm that is.
Look at his red eyelashes in the sun, so cute.

We've had limited sucess in getting T.J. to like water. He does better now for baths- but we had the same problem for the longest time. He is liking the pool ok at the Y. They have a zero depth one so he can stand. But he still doesn't like the pool in our back yard. But, I agree to try, try, try. Hopefull he will get used to it! I'm not sure if it is the temp of the water or that it is HUGE. Kind of overwhelming- scarey to them? Or maybe he just needs his mommy to hold him ;o)

Poor guy! And poor Mama! That has got to be so tough at bath time. Marissa has never really minded her bath, plus with her trach, it is all business. We are in and out in no more than 5 minutes. She liked the pool the first time last year, but we tried it two more times and she did not. So we gave up and tried it this year and she seems to like it better. All that said, I really don't know what to tell you about Gavin's water aversion and how to get him over it. Maybe, like the others have said, repetition is the key. Maybe once he figures out he will not drown, he'll be OK.

My peanut hates water too! Bath time is a nightmare. I never even DARE to try and was her hair in the tub. If I put water on her head or face, it's all over. I now buy this waterless shampoo and conditioner for her, it's designed for bedridden people. It suds up and then you rub it out with a towel. Easy and dry!

What great pictures! What a cutie he is. Isabelle is not so keen of water unless it is the bathtub and for that the water has to be pretty warm. Everytime I've tried dipping her feet in something like a pool or a lake I think the coldness scares her. I'm hoping sometime we can try the lukewarm hot tub thing or else a warm water pool. Good luck and keep up the good work.