We have a ton of nicknames for Gavin. I call him by quite a few different names throughout the day and I'm sure that he is somewhat confused about what his name actually is! One of the names that I call him is, "Littles." He is small for his age and such a cutie, so I think that it fits him well. Joel says that Gavin doesn't appreciate being called little, so he calls him, "Big, Little." This name is probably more appropriate for Gavin, especially taking into account the following pictures in this post.

A good friend of ours recently gave Gavin a gift. She thought that it would be good for him and that he would enjoy it. I had my doubts about this, but am thankful to have been proven wrong. She bought him a walker. It's kind of like those 'old-fashioned' kind that actually allowed your baby to 'walk' around in it. Most of them today are called exersaucers, but they are stationary, so I'm not sure why they are named this?! She was able to find one that actually allows your baby to 'walk' around in it. She is determined that Gavin will do more someday and I pray that she is right about this. But, even if he isn't able to, she has made it possible for him to 'walk' as well as he possibly can.

Here he is trying it out! 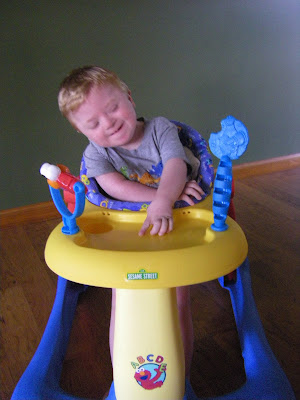 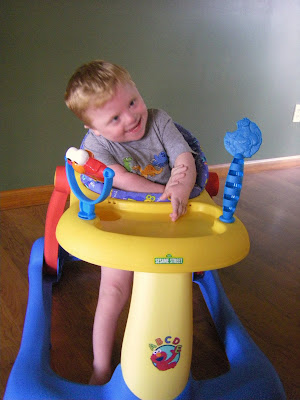 He has a hard time keeping his head up and under control, but this is probably a great way for him to practice head control and build some neck muscles! 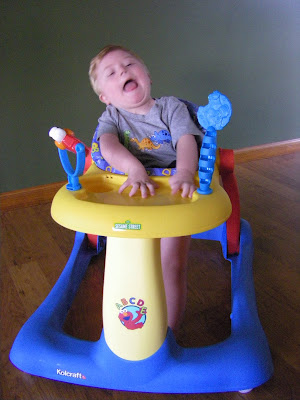 I think he looks adorable sitting in it and it's so nice to see him sitting up a little more on his own! He is even moving the walker around a little bit, by pushing off the floor with his feet! He looks so proud of himself and he should be proud! I'm awfully proud of him for doing so well in it! 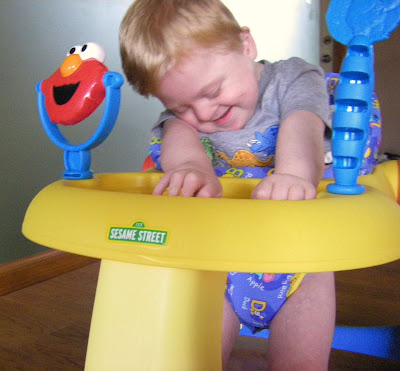 Thanks Cindy! We appreciate your thoughtfullness and are having fun with your gift to Gavin! Love ya!

I love it!! I especially love the last picture. It looks like he is saying "Aww shucks Cindy, thanks!" , kinda being bashful! Too cute!

Oh my gosh, look how straight he's sitting. What a big boy, and definitely a work out for that neck and head control.

Four of my children at work use these: http://www.phc-online.com/Gait_Trainer_p/meywalk.htm. I don't know if any of them will every walk, but the older ones started using them years ago, and it has helped so much with bone density and their ability to stand while transferring. Even that little bit of independence for them is great! Go Gavin, you rock!!

Wow, That is a whole new dimension to Gavin. He looks great in it and I think he is liking his new found views of the world.

I put both of my kids in walkers before most baby books would have said they were ready. They always loved it--it was as if they had gained some kind of independence even though they couldn't do very much. Looks like Gavin feels that way, too! It's so great seeing him having fun.

Such a handsome little boy, I have never been to your blog just stopping by because I saw your name as the VW's and my intitals are VW! God Bless with your beautiful children. :)

What a great gift. He looks like he's really liking it.

Wow....I can't get over how big he is getting!! Looks like he's having a great time in the walker.
Love,
Julie