Coughing and the Beeping of a Poor Oxygen Reading.....

These are two sounds that drive this Momma crazy!!! I have never liked the sound of coughing! It's kind of like the sound of someone running their nails down a chalkboard to me. But, coughing sounds even worse to me when it's coming from my sweet Gavin. He's doing lots of this today! Poor little man! While the sound drives me nuts, I'm happy to hear it because it means that he is coughing stuff up and it's not staying in his lungs at least. We never give Gavin cough medicine, just for this reason. We WANT Gavin to cough! But, today this sound is wearing on me!

The other sound that I detest is the sound of the oximeter beeping, telling me that his oxygen sats aren't where they should be. Unfortunately, Gavin is still dipping into the 80's at times and I don't like this one bit! Thankfully, the extra breathing treatments are bringing his sats back up, but I wish that they would just STAY THERE!

Gavin does seem to be doing somewhat better though. His fever is gone, he is sleeping less during the day and he is happy again at least! 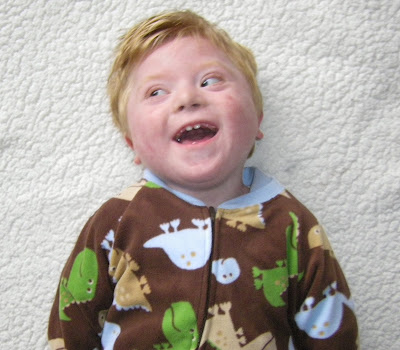 I haven't brought him to the doctor, because I know that they will want him to be seen at the hospital and I don't feel that this is necessary at this time. Does this make me a bad Momma? I don't think so. I have just learned to know when Gavin needs to be in the hospital and when we can handle his illness at home. So far, so good. I pray that it stays this way!

But, hearing these annoying noises and being mostly stuck inside are turning me into a grumpy Momma!

One thing that is a remedy to my grumpiness is seeing Gavin in footsie pajamas! 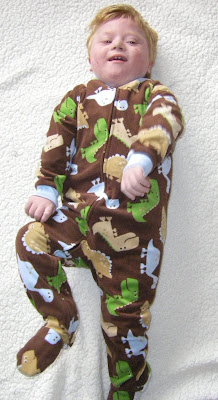 Isn't he cute in these?! I LOVE footies pajamas on little babies and children! Unfortunately, Gavin hasn't been able to wear them because he is always hooked up to his feeding pump at night and there is no place for the feeding tube to come through, when PJ's have feet in them.

Joel's Mom and I finally got smart. Between the 2 of us, we figured out a way for him to safely wear them! I've seen kiddos wearing them with the tube sticking out the top of their PJ's, but Gavin would be constantly pulling on it if he could reach the tube. Check out the idea and handy work below!

Joel's Mom ripped out a small part of the seam in the crotch of the PJ's and then she sewed along the torn edges to prevent them from unraveling with wash and wear! 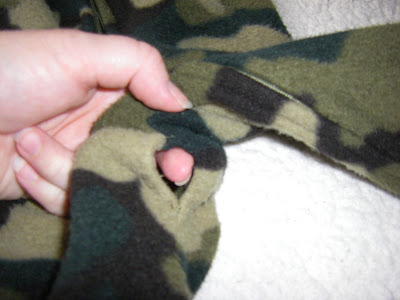 Here is the tubing going through the ready made hole! 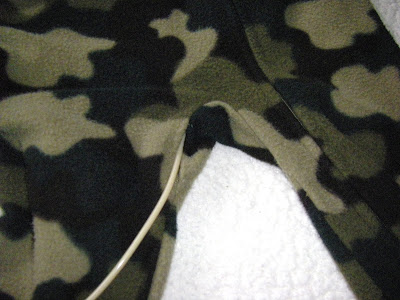 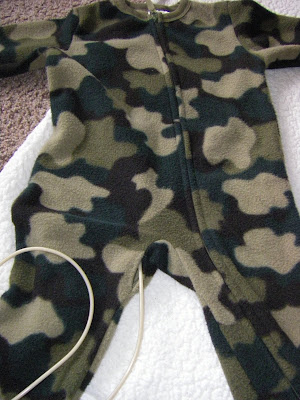 I am LOVING Gavin's new footsie pajamas! They are medicine for this tired and grumpy Momma's soul!

Too cute! Addy couldn't wear them either! Now that she can she HATES them and pulls on the feet so they are still a no go! Keeping Gavin home is the best thing for him, you know what you're doing and going to the hospital will expose him to everything!

LOVE.IT! Those jammies are great, thanks for the idea. :) His smile would make anyone less grumpy! So cute.

Brilliant... we always just hunted down the kind with snaps but that is a better idea:) You ladies are so clever!

Thank you for all the long distance hugs and prayers, they mean the world to me:)

So sorry he is sick but I am glad to hear he seems to be doing better. I am glad you feel good about keeping him home. Any time you can avoid the hospital, it's a darn good thing! I'll be praying he can kick this thing quick.

LOVE the PJs!! Great idea for the g-tube port!

Oh man, I'm sorry he's still sick. BLECK! You are NOT a bad Momma! I think we have to really weigh taking them in to the doc/hospital anyway bc of all the junk we expose them too if we do. Most often, making them worse. Hang in there, Alicia. I'm praying for you!!

LOVE LOVE LOVE the ingenious sewing of the footied pj's I may have to embark on this task myself. He's adorable as always!!

Feel better, soon, Gavin. It's so good that God gave you a mommy who knows how to take care of you. Love the camo PJs!

We have done that trick on jammies for a while now, isn't it great! I love footsie pajamas. Unfortunately my Peanut gets too hot too easy, so she overheats in those heavy jammies. Gavin looks adorable though!!

I also agree with you on staying home when he's sick. You wouldn't keep him home if you thought he was in danger or was beyond the realm of your care. We are usually best at knowing when our kids need to be in the hospital or not, and the less the better!

I'm sorry he's sick. Poor guy:(
I had to laugh because I, too, love footie pajamas, so all Ava's have holes for tubes/wires in them also. Adorable!!

When I and my brother were younger, my mom made a hole in thecrotch of the pajamas because we were both on O2. My mom also met a friend at the doctor's office one day when she had to take me to one of my WEEKLY doctor's appointments!!! We both had the same equipment (g-tube, O2, etc). We are still in touch 18 years later!!!!!