Kind of a crazy combination, huh?! I do have a reason for blogging about these topics though.....Read on!

Today is the big day! Gavin has an appointment with his neurologist this afternoon, to receive Botox injections in his hips, legs and ankles! I am really nervous about this and poor Gavin, he doesn't even have an idea about what today is about to bring him!

I'm nervous about the injections because I have no idea what it all involves and how the outcome will be. On the other hand, I am REALLY excited about the difference that it could make in mine and Gavin's life! Ever since he had his stroke, he has been so stiff. He is especially stiff in his hips and ankles and this makes it difficult to dress him, put shoes on him and to get him in the sitting position. I seriously dread dressing him each day because it can be physically exhausting to me and him! Plus, getting his AFO's on are a nightmare! I told his teacher that it was difficult and she said that they would put them on him each day for me, but after she did it a couple of times, she said, "Don't feel badly about not being able to put them on him easily! It takes 2 of us to do it and afterwards we are worn out!"

I pray that this procedure goes well and that it really makes a difference for Gavin! I also hope that it's not too painful! Poor boy! Say some prayers for Gavin today!


As for the suckers:

My sister and her husband (Amy and Mark), recently went on vacation to Paris and London, and guess what they brought back for our boys?! 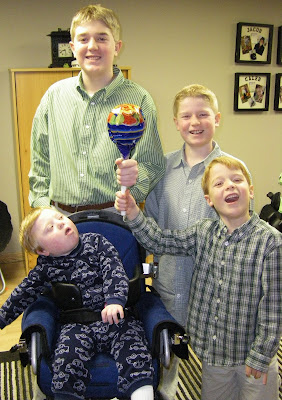 The boys LOVED it! Well, Gavin wasn't so sure about it at first: 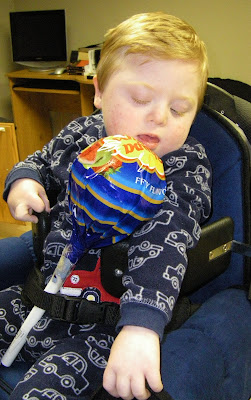 I sometimes do speech and feeding therapy with him using suckers. I think that he was a little frightened about the possibility of this huge sucker going into his mouth! He's not to keen on little suckers, let alone a monster sucker!

But, after I told him that I would not be using this one during his therapy, he decided it was quite cool! 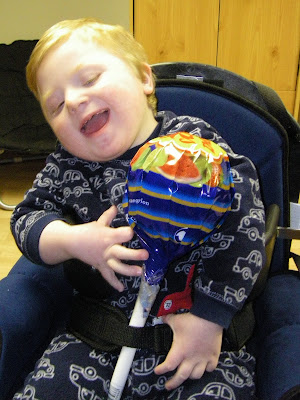 Here is a picture of the wrapped sucker:

Here is a picture of the unwrapped sucker: 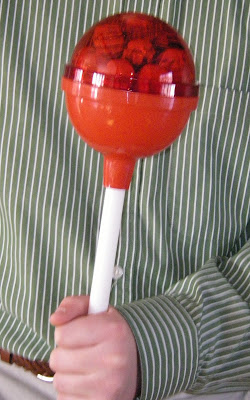 And, here is a picture of what the giant sucker really is: 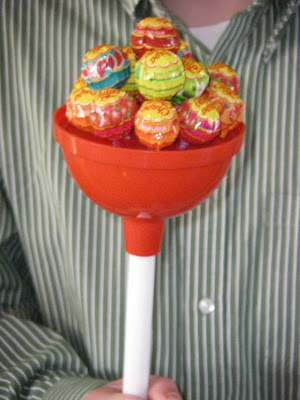 Nolan even thought of a purpose for the wrapper! He said that you could use it as a rain hat, since it's so big! 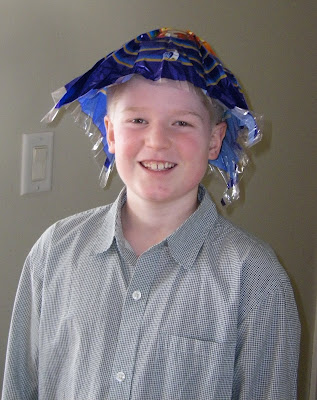 I love fun items like this! Thank you Aunt Amy and Uncle Mark for the cool gift and the fun that it brought to all of us!!!

Please remember to pray for Gavin today! I'll let you know how it went!


"Confess your trespasses to one another, and pray for one another, that you may be healed. The effective, fervent prayer of a righteous man avails much." James 5:16
Posted by The VW's at 9:15 AM

Sending Prayers your way! The boys are looking soooo grown up - even Gavin! I really hope that the injections give both of you some relief. :)

I probably have said this before, but my friends little girl has had botox in her salivary glands a few times now. It was fast and easy, and she liked the results. Hopefully it works great for Gavin!

Haha! I love it! So glad the boys liked their gift! Nolan is onto something with the rain hat... ;o)

GOOD LUCK today with the botox! What a relief it would be for you and Gavin (and his teachers) if this helps him. I hope he isn't in too much pain during and after the procedure. I'll be thinking of you both today. (((hugs)))

Love and miss you!

It's really not too bad of a procedure. Ben's had it done a few times, although it didn't really work for him. Good luck, I really hope this helps with his AFO's.

Good luck with the botox today Gavin! I hope it isn't too painful and that the results are wonderful. It would be a great thing if it loosened him up a bit.

That sucker is amazing. What a fun gift!

cant wait to hear how it went. I really wanted those to be true huge suckers!

Prayers for a good outcome. Amen.