Do you ever wonder why you rarely see pictures of Gavin with his glasses on? 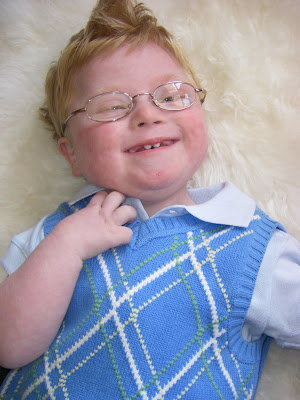 Here he is thinking that something just doesn't feel quite right! 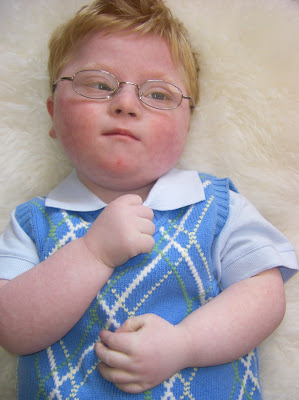 Here he is realizing that his glasses are on, and I think he's yelling for his brothers saying; "Hey! Come help me get these ridiculous glasses off my face!" 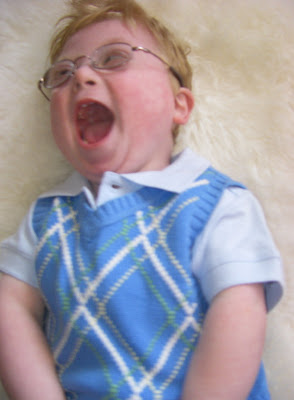 And when the brothers don't come to his rescue, he decides to carefully get them off himself! Here he is slowly getting his finger up to them to take them off! 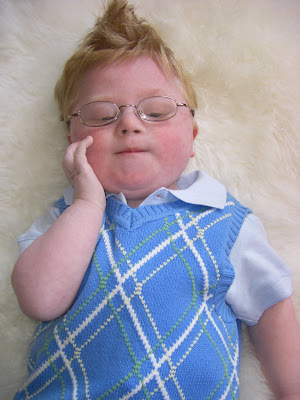 He hasn't worn them while at home for probably the last 6 months. Why???.....Because I got tired of constantly putting them back on his cute little face! Gavin is VERY good at getting his glasses off!

Gavin may not be able to sit up, crawl, walk, or talk, but Gavin definitely has one ability.....getting his glasses off!

His teacher asked me awhile back why he never had his glasses on and I told her that he doesn't seem to be able to see any better with them on, plus, he continually takes them off, so why bother?! She asked that I bring them to school anyway, so I did. Guess what she wrote in his notebook the other day?

"I must say, I now see what you meant when you said he gets his glasses off in the wink of an eye. I think he wins for being the fastest student I've ever had when it comes to removing glasses!"

Our other boys are always talking about World Records, so I've decided that Gavin should be in a book of world record holders for, "The fastest child getting his glasses off repeatedly!" Who needs to sit up and walk when you have skills like this?!

I would have him wear them more, if I thought that it was helping him, but it doesn't. He doesn't seem to see any better with them on. He tracks some things whether he has them on or not and he actually does it better without them, probably because he's not so annoyed by having them on his face!

Not to mention, Gavin seems to be SO MUCH happier when they aren't on him! 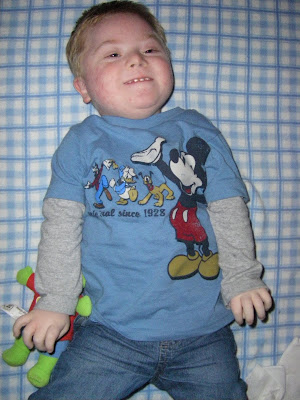 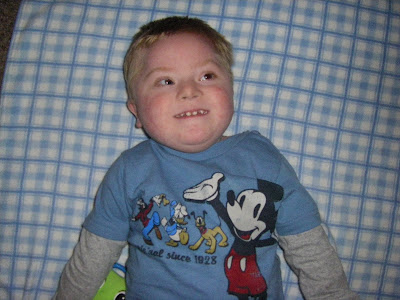 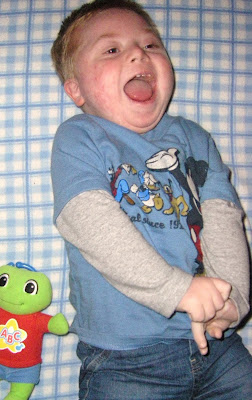 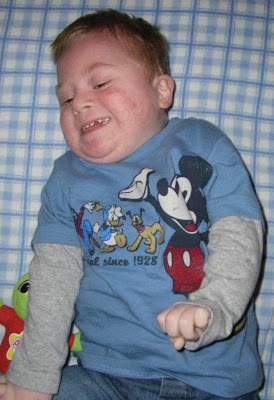 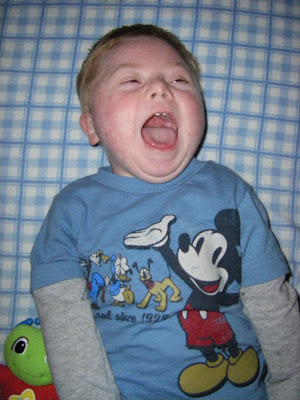 Totally precious! I love the way you told that story with all the pictures. And who can blame him for taking his glasses off so fast, repeatedly? Hey, when you've got a skill, USE IT!! ; )

Have a blessed day, friend!

I hate glasses too, Gavin. That's why I wear contacts! Are you are so cute--glasses or no glasses!

Love it, love it, LOVE IT! By all means, get them off Gavin:) I love your spirit!

Oh I just love him! He is such a character. My Peanut takes her glasses off too. It's amazing that they manage to coordinate that movement quickly and precisely! :)

Sp precious! Alex wont keep his on for very long either. I can sometime distract him with play or a movie, and they will stay on, but as soon as he thinks about them, off they go!

First of all, we have that same blue blanket! And the Mickey t-shirt, a boy after my own heart. How do they know he needs glasses anyway? With Jax poor vision from his brain injury, they told me they have no way to tell how much he see's!

He is the cutest! I don't blame him for taking them off, although he looks adorable in them!

He is CUTE! Love that boy and his adorable smile. xoxo

Oh Gavin you silly guy. You look so handsome with your glasses.

Those pictures are great...the play by play of the glasses.
He is just so cute!

I love the glasses. Arianna is the same way with hers. She only wears them at school, they make her being that it is the school for the deaf and blind. But once she is off the bus she is pulling them into her mouth.
I know that our first day on the school bus was tough but liberating. I am stronger than I thought, and Arianna loves the ride.
Hugs from us all
Julianna

Genial post and this fill someone in on helped me alot in my college assignement. Thank you as your information.

He is definitely precious!