Miserable, But Making It!

Have you ever felt so sick that your teeth actually hurt?! That's how I've felt this week. I do not like getting sick and I look at it as failure. I usually stay quite healthy, but here I am sick!

I'm not the only one suffering. I really wish that I were though! It all started with Gavin waking up on Saturday morning with a cough. I didn't think much about it, because Gavin gags and coughs almost every day, but as the day went on, he got worse and he was miserable! I feel like a rotten mom, because despite the fact that he had a cough, we still made the trip out of town to visit my sister and to celebrate Jacob's and my Mom's birthday. We went to a museum and had lots of fun, but as Gavin showed more signs of illness, I started to feel really guilty.

He ended up having a 103 temp during that night and he was just miserable! I don't like being sick, but I hate it even more when my sweet boy is sick! He is such a trooper, even when he's sick! He rarely cries and he even gives us occasional smiles while feeling rotten! 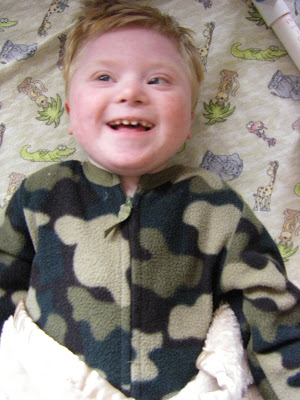 Sunday morning he was sick as can be and he was still giving us smiles! I think I've told you that I hope to be more like Gavin when I grow up.....and this is why! He is so good-natured and is a real inspiration to me, to just find happiness in even the littlest of things! If Gavin can do, why can't I?!

Well, when push comes to shove, I'm NOT so good at being happy when I'm down for the count!

I ended up getting sick during the night on Sunday and I've been pretty grumpy ever since! If Gavin felt like I do, he is definitely a better person than I am!

Not only is Gavin a better person, he is very good at sharing too!

He shared his cold with not only me, but Daddy, Aunt Amy and Grandma too! Isn't he so generous?!

So, not only do I feel miserable, I feel sad for everyone else and guilty that it was my son that gave everyone the cold!

Anyway, Gavin is feeling MUCH better and has sailed through this illness better than any other illness he has ever had! This gives me hope that his body is able to fight off germs better than it used to! What a blessing!

With Joel and I both feeling sick, it was hard having 4 children to care for! Monday evening I said; "So, who is going to take care of the boys? Do we just let them fend for themselves?" We decided that Gavin was probably the most responsible one of the group, so we left him in charge of the brothers and we went to sleep.................Just kidding! I took the Monday evening shift, since I was feeling a little better than Joel was. Then, Joel took the Tuesday evening shift, since he was thankfully feeling better than I was that day. Unfortunately, life doesn't stop just because the parents get sick! Wouldn't that be nice?!

This illness was a crazy one! It came on SO FAST and seems to be ending fairly fast as well! This morning I still felt rotten, but this evening I am seeing an end in sight! Thank the good Lord for health! I seriously felt rotten and it makes me appreciate my normally healthy body!

So, this week didn't start off very well and we've been a busy family lately too.....I've had lots to blog about, but no time or no energy to do it! Hopefully I'll catch up soon!

One great thing is that the weather has been so nice lately! Up until today we have had 9 straight days of sunshine and weather in the upper 40's and 50's! This makes me feel alive and it also has me getting out the flip-flops! :) 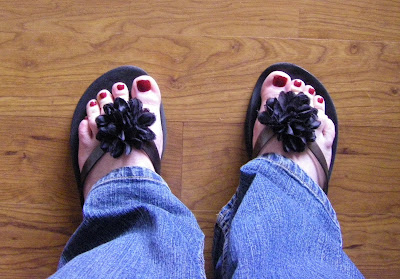 It may still be too cold for flip-flops, but when you are used to temps in the teens and 20's, this weather feels like Summer! So, as I recuperate, I'll be dreaming of the weather to come!

Woohoo for flip flops and pedicures! :)

I'm glad to hear that Gavin is so good at sharing, although I'm sorry that what he shared was germies. I hope everyone is well soon. I love that Gavin is smiling through it all!

Sorry you all got so sick. Luckily, Jeremy, Marissa, and I have never been sick all at once but I'm sure we will be one day. That has to be so difficult!

I hope and pray everyone is on the mend soon!

NO more guilt! That's an order. Your toes and flops are a welcome sight! FEEL BETTER!!!

Oh I hate being sick too. I'm such a baby! If only we could all learn from our kids!

I hope you both feel better fast. I loooove Springtime and flipflops!

Spring is coming!!!! Mothers should get sick days, I dont know how to work it out yet, but either we shouldnt get sick, or we should get sick days. I have friends that work, and when they are sick they still take their kids to daycare so they can be home and rest. UNFAIR! WE NEED SICK DAYS TOO!