Joel and I are not advanced planners. When we decide to do something, it is usually with short notice. We are like this with trips and vacations too. We just don't plan ahead.....I think that we plan ahead even less than we used to, since Gavin came into our lives. It may be a coping mechanism for me.....why make plans, to just have to cancel them due to illness, hospitalization or uncertainty? Gavin has been doing much better in the last year and a half, but I think that I just got used to not expecting to do much of anything, and it's become a way of life in many ways.

That said, I do think that we do a lot together as a family, despite these feelings and despite the fact that it is so much more difficult to go places with Gavin. It really does tire me out taking him into public places. Most of this exhaustion comes from the mental stuff that goes on in my head....."What do I need to pack?, Where will I be able to change his diaper?, How will I keep his formula cold and feed it to him when we get there? Is Gavin enjoying himself?, Is he tired of sitting in his stroller?, I should be holding him...he's probably bored...his bottom is probably sore from sitting so long...my arms are tired from carrying him around...I have to put him back in his stroller, because my arms are going to fall off, but I don't want him to be neglected.,.....Will his stroller/wheelchair fit through places?".....And, not to mention, I think that my eyes have actual telescopic powers since Gavin has come along!...because I can actually see all the germs that are lingering on items and in the air...SERIOUSLY!

Anyway, I think that you get the picture.....going places with Gavin can really wear me out! But, I refuse to let all of this stop me! I want to enjoy life and I want our other boys to enjoy life, so.....away we go!

We did just this, over the weekend. And, in doing this, we got our boys good!

They had a winter break and had a couple of days off from school. We picked them up from their 1/2 day of school on Friday and told them that "Dad decided to take the day off from work and we are going to go out to lunch." They were happy about this and away we went!

We had aleady packed up the car and, thankfully, we have a stow-n-go, so we were able to hide most everything from their sight. We started off to "lunch" and after about 30 minutes, they said "When are we going to get lunch?" We told them that we were trying to find a place to eat. Nolan said, "We have places right by our house!" Joel and I just played dumb and said that we could have gone to a place closer to home, but we didn't think about it, so now we'll just keep driving and try to find a place to eat. We finally stopped at a fast-food restaurant and got some food to go. Then, the boys wondered if we were going to go home? We asked them what they wanted to do and none of them could come up with anything, so we told them that we would just keep driving until they came up with something to do.

Long story short, we kept driving....and finally Jake said, "I think that they are taking us somewhere. Nolan, look in the back of the van and see if there are any bags." Nolan looked and said, "I do see bags! Where are we going?!" Joel and I continued to play with their minds, but did finally fill them in on our little secret!

Here are some pictures of the boys wondering what was going on and after hearing about our surprise: 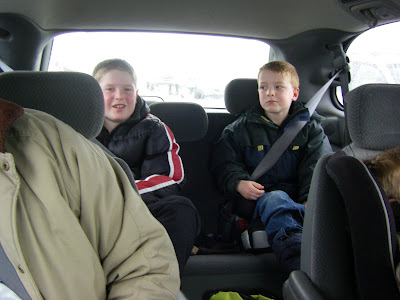 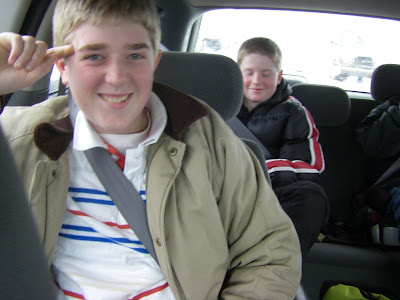 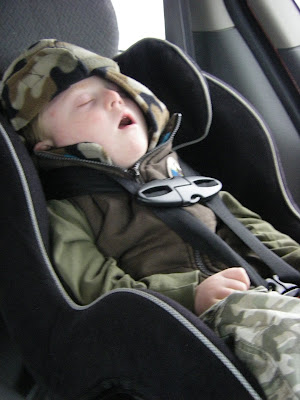 Our surprise was that we were headed to the Detroit area and that we were staying at a hotel and going to the Henry Ford museum! They were shocked that we pulled this surprise off and they were very happy to be going!

Here are some pictures of our trip to the museum:

We learned about the automobile industry when it was first starting out and they were able to pretend like they were workers in a factory during that time. 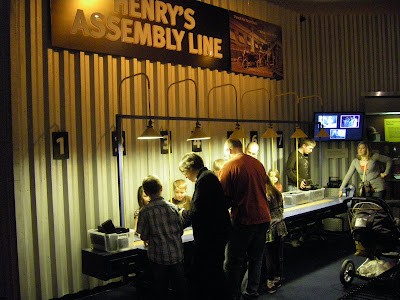 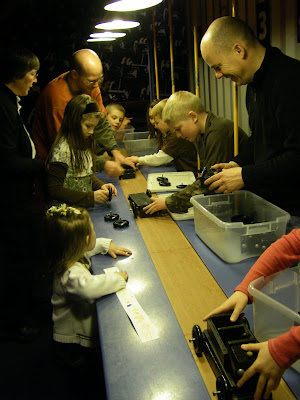 There was a lot of political history there as well. Caleb got to see and learn a lot about his favorite president, Abraham Lincoln. Here he is standing in front of the actual chair that Lincoln was sitting in when he was assasinated! Caleb was surprised to see this, but it also made him sad. 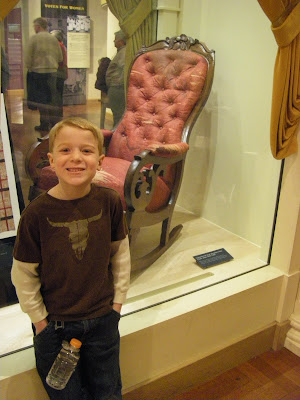 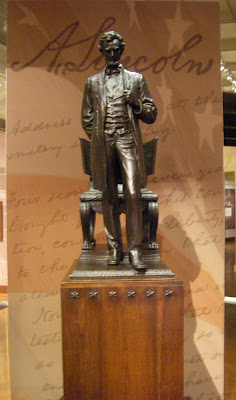 We got to see the actual bus that Rosa Parks was riding on when she stood up for herself and her people. Here are Nolan and Caleb sitting in the bus: 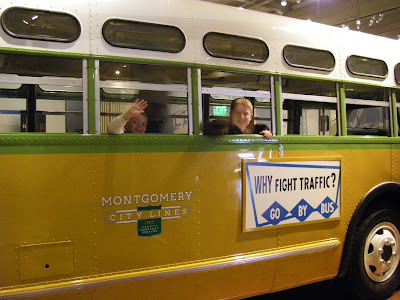 We got to see trains: 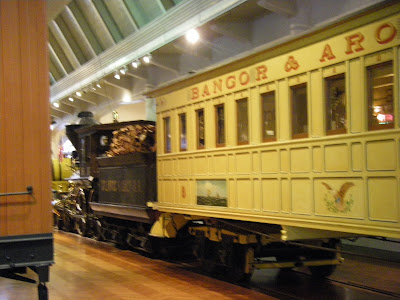 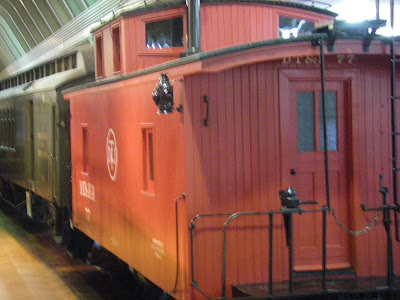 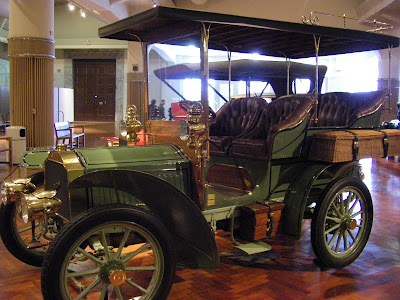 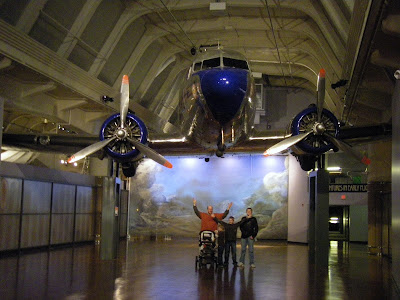 Here is our whole family by one of the antique Oscar Meyer mobiles: 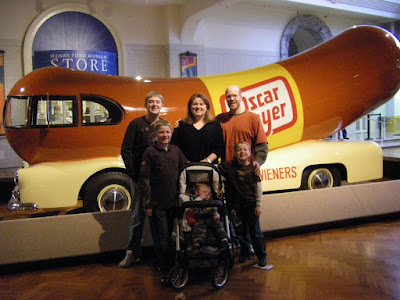 Oh, and we had one more surprise for our boys! My sister, their Aunt Amy, met us at the museum for the day! (She took the picture above, of all of our family.) The boys were so happy to have her along with us! Thanks for joining us for the day, Amy! It was so fun having you with us! Thanks for making the trip!

And, despite all my fears and worries about how Gavin handles being out in the real world.....I think that he really enjoyed himself too! :) 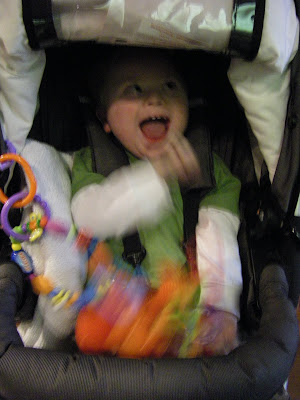 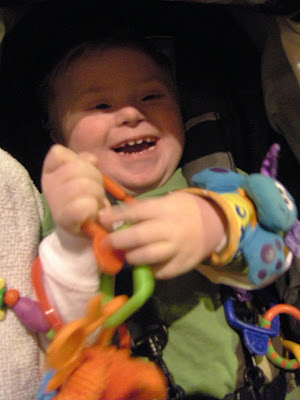 We had a great weekend! The only bad part about it was having to come home again! But, we sure were thankful to have the chance to get away!

Wow, that is so great! I love that you pulled off the surprise on the boys, awesome!

It looks like you all, Gavin included, had a great time. I hope you can do it again soon!

Ahhh..I love that! I bet those boys will forever remember that car ride, what super cool parents you are!

I agree, sometimes you just have to go-for-it...and not think too much about the what-if's with the little one...thanks for the reminder!

What fun parents! And after seeing those pictures, I have no doubt that Gavin had LOTS of fun! What a blast!

WOW! I LOVE surprise trips like that. They are so fun to pull off. I'm glad you were able to get away - looks like you guys had a BLAST!!!

I love how you hid it from the boys! What a great weekend, I can't wait for ours. I'm a little freaked out about his stroller though. I wanted to take it to be adjusted, but didn't have time. We did it a little ourselves, but it still looks off. Now I'm going to spend all weekend worrying about if Jax is comfy!

That is such a cool museum--especially for boys. I'm glad you had a nice time getting away. How fun that you surprised them like that! What a great memory you gave them!