Why is it I often feel so bored, but when I look back on my week, it's been a very full one? Here is a condensed version of our family's interesting week.

***Gavin had his first field trip/function with his school. We were invited to a baseball game and dinner, and we had lots of fun! We got to see many of the kiddos that attend his school and they were all so adorable! 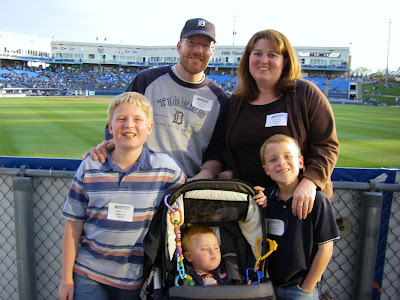 ***Joel and I celebrated 15 years of marriage! It actually seems longer than this, but I think it's because we have gone through a lot in those 15 years, so it feels like a lifetime! We didn't do anything special, but we hope to get away some time this summer for an overnight trip, because it has been WAY TOO LONG since we have been able to do this! We don't really exchange gifts anymore, because what is the point when you need nothing! But, Joel did give me a very sweet card and in it he wrote:

"Thank you for all you have given me the last 15 years! I pray that I grow as a husband for you and meet all of your needs. We have been through many trials and hard times that would have broken many marriages. Thanks for staying in there with me! Love forever, Joel"

And, this was the perfect gift to me!

They say that 80% of marriages fail when there is a special needs child involved. Joel and I have gone through lots together, even before Gavin came along, so I'm confident we are going to survive! We go through tough times, but we are both stubborn and we DO TRULY love each other......so "bring it on" to another 15 years of doing this thing called life together! :) Love you Joel! 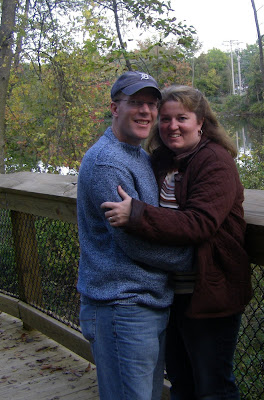 ***We got to see a couple of friends that we haven't seen in forever! In fact, my childhood friend, Lisa, is actually the one who introduced Joel and I to one another, so it's fitting that we got to see her again this week! She now lives in California and we rarely get to talk or see each other, so it sure was great to see her and to think back to our fun days together as childhood friends! 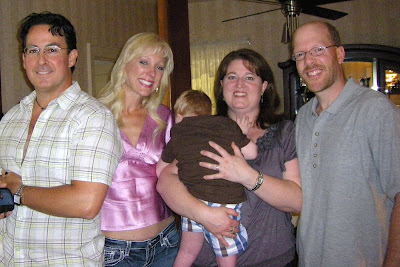 ***Earlier in the week I sent my firstborn son off "on his own", to go on his first trip without us! (This is why Jake isn't in the family picture above, which is of most of our family at the ballpark.) He had tons of fun on this 8th grade trip and I actually survived letting him go! (But, why do they have to grow up so fast??!!)

***Of course, there were a few sporting events to attend the last week, because what would our family do if sports wasn't apart of our life so much during the Spring?!

***OH, and Joel got stuck in a traffic jam on his way to work last week and actually got hit by a SEMI-TRUCK!

(No, Moms we didn't tell you because he was totally fine and the damage that was done to his car was minor....relax....take a deep breath! :) )

Anyway, they were only going about 2 miles per hour and the semi didn't see him and kept going and Joel had to roll down his window and bang on the truck to get the driver's attention before he did more damage to Joel's car and maybe even to Joel! I about freaked out when Joel told me this, but he waited until he got home, which is probably a good thing so that I could see with my own eyes that everything was fine, but seriously....do I need anymore of this kind of excitement in my life?! Oh, and Joel got reamed out for being late to work.....seriously?! I can't understand some people! Like he caused this to happen! Anyway, we feel very blessed that Joel and his car are mostly fine and I have to say that I married a forgiving man! Because Joel didn't even ask this driver for his insurance information. He said we all make mistakes and that he was fine and able to drive away, so what was the point to making this guy pay....it's just a car and Joel says he's been forgiven for lots of things before too. I personally would have been angry and made this driver pay....but the more I thought about it, I realized that Joel was right in making this decision and it again proves to me why I married him in the first place! He's an honorable and kind person!

***Lastly, Gavin got sick on Friday and I thought for sure that he would be in the hospital with this illness, but he's still home and I am so thankful for this! He has a nasty cough and his sats have been dipping into the 80's, but he's holding his own for now! He actually got better for awhile yesterday, but during the night his lungs sounded horrible again and his sats were down again, but today he is hanging in there! We are just doing lots of CPT and extra breathing treatments, so hopefully this does the trick.

We've had this hooked to his (CUTE) toe a lot, checking his oxygen sats: 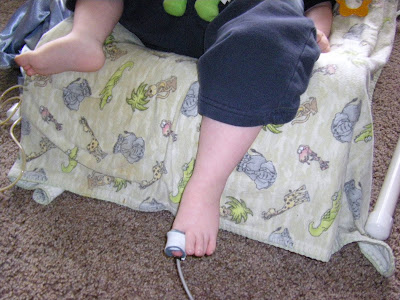 And, he hasn't been feeling that great: 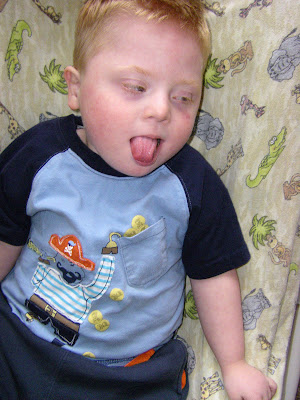 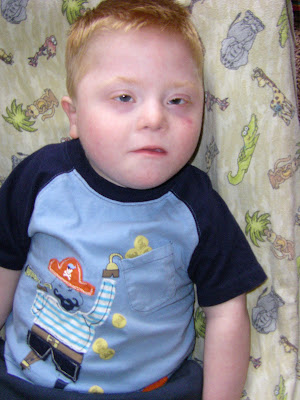 But, he still makes sure to give us lots of smiles! He is such a trooper! 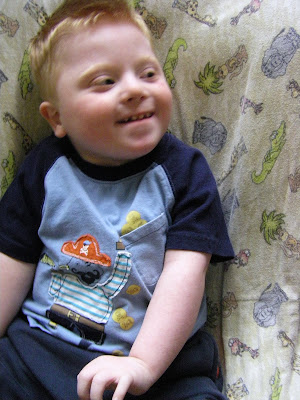 This week is going to be another full one for our family! There are 3 field trips planned for 2 of our boys. I hope to go on one of them. There are only 8 1/2 days of school until summer vacation starts! Jacob has his 8th grade graduation and I'm MAKING him study for exams! Their school has field day on Friday, which I'm planning on helping out with. And, of course, there are some sports thrown into the mix! So, I'm praying that Gavin gets better soon so that I can participate in all of this! Say some prayers for him, will you? Thanks!

Wow...what a week you've all had! I'm so grateful that Joel (and his car) survived the semi accident! I always check your blog to make sure that I am current with what is going on in your lives, as you are often too busy (or you don't want to burden me??). Please let me know if there is anything at all that I can do for you this week with Gavin being sick and all that you have on your hectic calendar.

I love you all so very much!

And tell Gavin to knock it off and feel better. Way to many sweets in the hospital already in blogland... it's not one of his options!

LOVE the pictures - and HAPPY ANNIVERSARY! That's awesome. :) You're life is busy and adventuresome. Enjoy the quiet moments.

Busy, busy...yes you are, my goodness how could you feel bored?

In my opinion, our anniversaries are as big as any milestone our boys may achieve...we husbands and wives of sick and special babies have the regular marriage crud everyone deals with, with heaping load of extra marriage crud and stress added to our plates!

Oh...and Gavin even sick is way too cute!!! But I can see a little bit of the icky look in his eyes...hope he feels better soon!

Yeah he's looking a little purple around the eyes! When my ped told me the rate of parents divorcing was higher for a special needs kid than the death of a child, I couldn't believe it!

Happy anniversary--a little late! It's nice to see how God holds together what (or who) he has placed together!

I hope Gavin is feeling better by now!

Wow girlfriend! You are making my head spin!

I am glad the week you had was a good one, despite Joel's accident. I am so glad he is ok!

I hope Gavin gets better soon. It is good news that he has avoided the hospital. I'll pray he keeps it that way!

Happy anniversary! It IS an accomplishment to have a loving, successful marriage last as long as yours has with what you have gone through. Congratulations!