What it's like to be followed by the Paparazzi:

Our family was given a cool opportunity the last few weekends. A friend's daughter asked us to be a subject for her photography/journalism class, that she takes in college. She came to our house the last few weekends and was kind of like a "fly on the wall." She took pictures of our family as we did our normal weekend activities.

She took tons of pictures and then had to choose a few of them to add to her project. The project was to tell a story in just 6-7 pictures, with a caption underneath each picture.

Here is her finished product, which she named:

Gavin Vander Wall, 3, of Byron Center, was born with Down syndrome and severe heart defects. Gavin spent most of his first year in and out of hospitals for five heart surgeries. In April of 2007, Gavin suffered a stroke that left him unable to talk, walk, and hold his head up on his own. His mother, Alicia Vander Wall, 38, has kept a blog as a both way of giving Gavin a voice in the world and to show her readers the joy, even through the struggles, that a boy with Down syndrome brings. 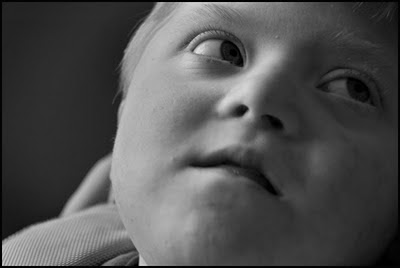 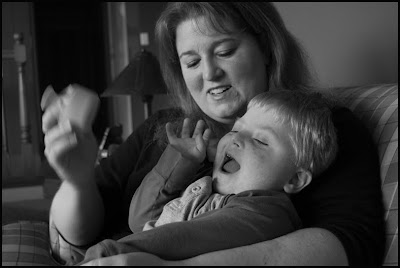 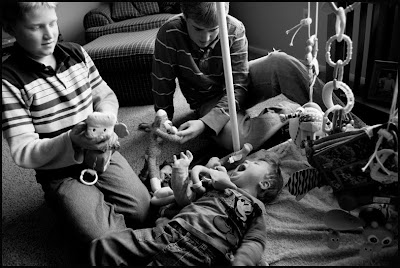 Nolan Vander Wall, 10, and Jacob Vander Wall, 14, play with Gavin on April 24, 2010. On June 18, 2009, Alicia Vander Wall wrote, “I love that our older boys love Gavin! It makes me so happy to see them WANT to be with him and WANT to play with him! They truly enjoy having him as their brother, even though he can't do a whole lot or get up and play with them.” 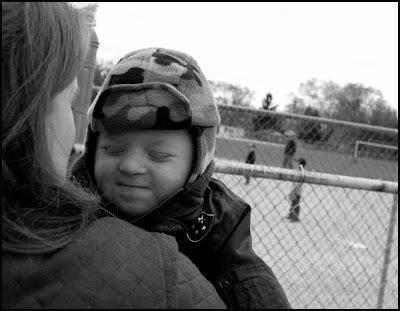 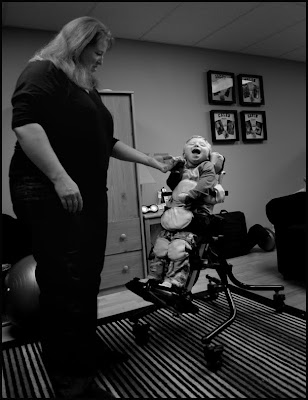 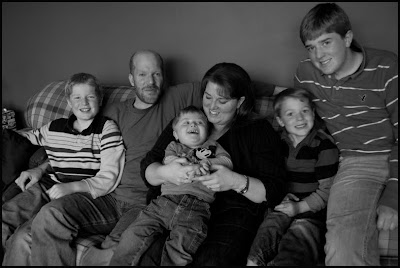 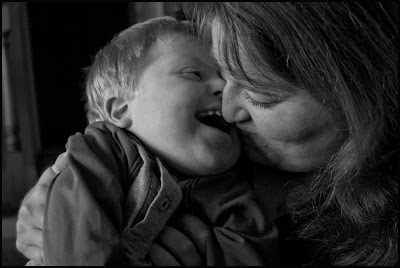 Alicia Vander Wall, 38, and Gavin Vander Wall, 3, of Byron Center, share a moment together on April 10, 2010. Despite Gavin’s numerous medical obstacles, Alicia writes on February 25, 2010, “Gavin has brought me more happiness than anything else on earth possibly could! I can't even express the joy that he brings me each and every day! Joy that comes just by looking at him and seeing the good that radiates from him! God knew that I needed this special boy in my life!”


I think she did a fabulous job! She thanked us for helping her, but we are the ones who benefited from helping her out! She took some great pictures and she is giving us a copy of them on a CD. So, we actually got a free personal photographer for 3 weekends in a row!

Thanks SO MUCH Katie! You did a great job! You will make a WONDERFUL photographer some day!

Katie actually does photo shoots now. She is great at what she does, so if you live in the G.R. area and are looking for someone to take some pictures of your family, let me know and I will give her a call!

You can visit her Photography Facebook page here and check her work out for yourself!

While you are on her Facebook page, Vote for Gavin!

She is having a contest right now and the winner gets a photo session with her. Go to her "fan photo" section to vote! All you have to do is become a fan of her Facebook Photography site. You can also upload a picture of your own child (10 and younger), if you are interested in winning as well! You have to have the photo session done in this area, if you win.

Anyway, Check her out!


"I sought the Lord, and He heard me, and delivered me from all my fears. They looked to Him and were radiant, and their faces were not ashamed." Psalm 34:4-5
Posted by The VW's at 9:02 AM

Awesome! What an amazing experience that must have been, on both sides! Katie did a great job and those pictures are fabulous. I must say, I loved being able to see more of you, Alicia!

Have a great day!

How great! I love the photos, we rarely see YOU, mama. :)

Thanks so much, Alicia, for opening your home and family to Katie. It probably wasn't entirely comfortable having a "fly on the wall" there. It was a great experience for her. Thanks again!

That is awesome to be able to have privilege like that. They are awesome pictures.

Oh those pics are fantastic. I'll have to show my hubby, he is finishing up his photography project this week for finals and he is doing it on DS kids. Calling it the upside of Downs!

What a neat experience...seems both sides gained a lot!

Fun to see you with Gavin...
I especially loved the last close-up, snuggly-kissy picture!

These pictures just made me cry! Especially the one of the whole family. I am in awe of the love you all share and the happiness and respect those boys have for their baby brother. *SNIFF*

Such beautiful pictures! WOW! I love that Gavin is SO happy in every single one. He is so lucky to have your family...one that brings HIM so much joy. Beautiful.

Oh those pictures are just priceless. Gavin's grin is a peek into heaven, isn't it? What a beautiful family you have!

I'm in tears!!! The big ones that slowly roll down your cheeks.

Love, love that photos...nice to see you and all the gang! Of course Gavin is ADORABLE! He has one of the sweetest faces ever!

I love, love, love photos. I would love to have my own photograher following me around, it is great to capture the everyday moments. I would also love a house keeper, personal chef and personal driver...