How much should I tell people? 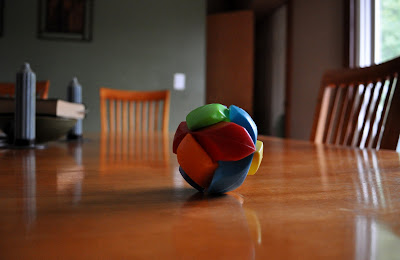 This week I had a dentist appointment for myself. I took Gavin with me for the appointment. He sat in his stroller next to me while I was having work done, and he behaved himself so well that the dentist said he could pick a toy from the treasure box. I was thinking to myself, of course he was well behaved.....Gavin is always a good boy! But, I guess this is rare for a soon-to-be 5 year old boy. They are usually busy and can't sit still! Gavin is easy to bring along with me, because I always know right where he is and that he won't be getting into anything. But, the dentist seemed surprised by how great Gavin was throughout the appointment.....and this got me thinking.

When he offered the toy to Gavin, I was about to tell him that Gavin wouldn't really be able to play with any of the toys.....but then I realized that explaining Gavin's developmental stage would take too long, and it didn't really matter if the dentist understood why Gavin wouldn't play with the toy. So, I pretended to show Gavin the toys and ask him what he would like....and then I took a ball from the box, knowing full well that Gavin wouldn't be playing with it, but feeling proud that the dentist thought Gavin was a good boy and deserved a toy anyway. 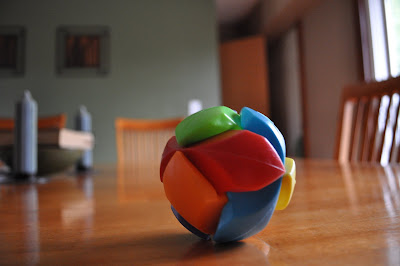 I always struggle with times like these. How much should I tell people concerning Gavin? I know that they realize something isn't typical about Gavin.....especially when they ask me how old he is.....but do they really want to know Gavin's story? Do they really want to know that Gavin's brain is totally damaged by a stroke, and that he is unlikely to advance much further than he already is.....or do they wish to remain in their blissful state of innocence that all children progress, and this includes Gavin? 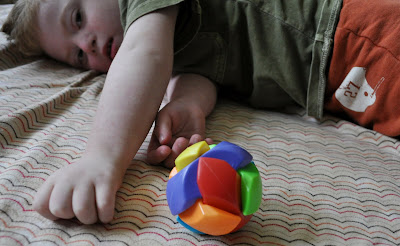 The last time I took Gavin to the neurologist, he was seen by a new person to that office. She started talking to Gavin like he understood what she was saying to him. She was asking him questions and explaining everything to him in detail. I do appreciate it when people treat Gavin the same way they would treat any other child, but should I have told her that Gavin can't really understand all that you are saying to him, and all you really need to do is just be gentle with him and talk to him in a kind voice, because he doesn't understand what you are about to do anyway. But, again, I just let her do her thing, without explaining everything to her.....because quite frankly, if you ask me, spending any more time in a doctor's office than I need to is quite unnecessary! And, taking the time to fully explain Gavin to her would have meant that we would be there longer than we aready had been.....and Gavin and I do not like spending our days at the doctor's.....we are there often enough already! So, I said nothing. 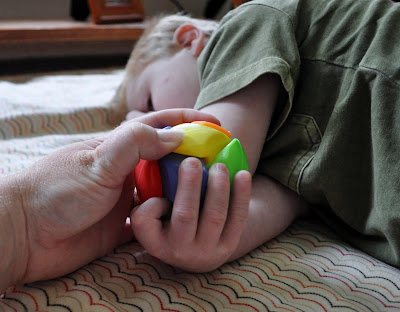 I did try to have Gavin play with the ball he got at the dentist office.....but he can't hold it, or control it. But, he did feel it and get some stimulation from it's texture.....so that's probably good for him.

Another time I wondered if I should explain things about Gavin was this past weekend. We were at a wedding, and there was a band playing music there. Gavin started to have a seizure, which makes him jerk and move irregularly. Most people don't notice that he is having a seizure, because it doesn't look like the grand-mal seizure that most people typically think is what a seizure looks like. But, one lady sitting by Gavin said, "He looks like he is trying to dance! How cute!" My first thought was to tell her, "No, he's just having a seizure." But, then I decided to just let her think that he was trying to dance.....because that is a much better thought to be left with, than he's having a seizure!

So, as you can see, I have a difficult time knowing how much I should tell people when it concerns Gavin. I love to talk about Gavin with others, but I don't want to overwhelm them with all that Gavin is. Plus, when I do tell them more about Gavin, and then I follow up the story with how blessed we are to have him in our lives....they usually look at me with pity or don't believe me when I explain how happy I am to be his Momma! I guess no one can truly get it, unless they have a child like Gavin.

I may carry a ton of responsibilty on my shoulders caring for his many needs, and having so many thoughts running through my head.....but I also get to look at this sweet boy each day! 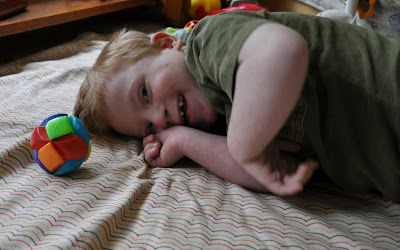 I get to hold him and love him each and every day! And, despite the weight that is always on my shoulders, I am filled with such lightness when he gives me one of his infectious smiles! I may not know how much to tell people about Gavin, but the one thing I want everyone to know is that I am one very blessed Momma to have him in my life! : )

One thing that happens to us a lot too, is people talk to him and tell him what they are doing as if he understands. He is almost 6 after all, so they just assume he does. I never say anything, just let them keep on going!

Alicia...I SO get it. All of it. I struggle too...the " story" is so long....it's easier just to smile and say nothing.
I have also found when people ask "how's Hudson?" I say " doing good, as good as he can be for Hudson" because I know he is never really " good" and it feels weird explaining why he is never "good" he is sick, always will be, suffers daily....but hey...if he is not hospitalized, not throwing up, seizing a little less....well then I guess he's good!

Such a complicated existence, huh? I guess that's why we are so lucky to have this...other moms who "get it"

And btw....I still cringe when strangers try and talk to Hudson...I never assume they get something is wrong,and I usually don't have the time or energy to explain why there is no eye contact, talking,etc.

Wouldnt it be wonderful if there was a s.n. community where we could all gather annually, live...not on the Internet, and just hang??? that would be cool!:)

hugs to you and sweet Gavin!

I don't know how you feel exactly so I'm not going to say I do, but i do know how it feels when someone just assumes that your child understands. It is totally different with Em i realize that, but so many times people meet her and talk to her , ask her a question and wait expectantly for a response. A response that is not coming, she's not going to answer them, so instead of explaining that she is almost three and for the most part non verbal I answer for her. They think that she is shy and cute and if it's just a casual meeting I leave it at that. I only go in to detail with people that will be in her life or friends, or people who have the time and desire to listen and learn.

Oh ... do I know this dilemma! Emily doesn't talk, and she doesn't play with most toys except baby toys. Stickers? She doesn't care about them. Yet every new doctor or nurse or child life or whoever wants to give her a sticker. I just take it, hold it in front of her like she wants to see it, and say thank you.

I would have done the same as you at the wedding. I would have just smiled. It's so hard sometimes ... (((hugs)))