Having Fun With My Brothers 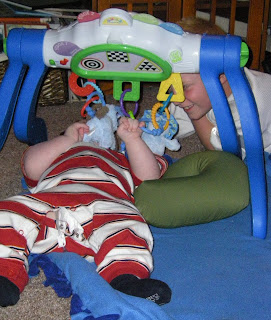 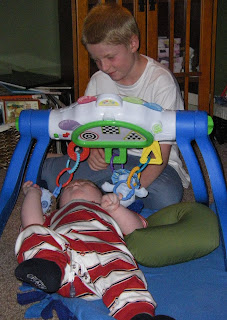 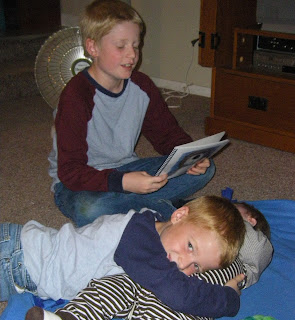 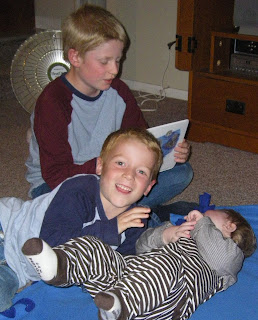 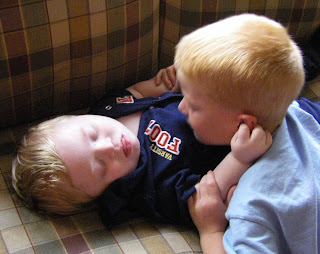 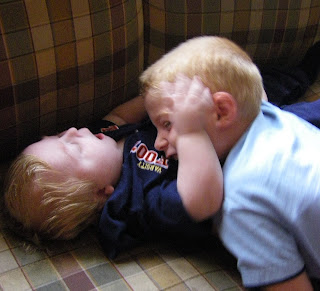 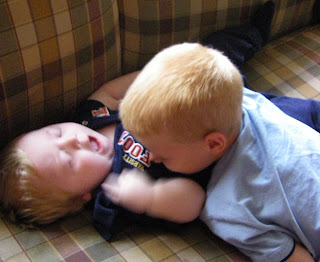 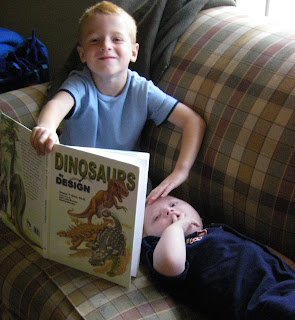 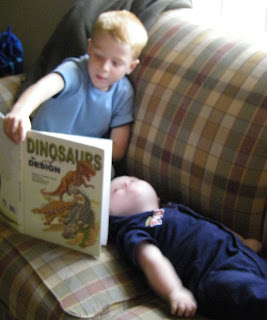 It's so heartwarming for me to watch our boys playing with Gavin! Jacob has always given Gavin lots of attention and wants to hold him often. Caleb has always gone in spurts of wanting to play with him and then not playing with him, depending on the day. Nolan has been somewhat indifferent to having Gavin around, up until the last couple of months anyway. Lately he's been wanting to play with him a lot more. I think it's because Gavin is more active and smiling, where he wasn't doing these things a few months ago. Now Nolan is the first to come running if Gavin is gagging and about to spit up and he seems to enjoy playing with him. There have actually been arguments between the brothers of who gets to watch Gavin while we are doing things around the house! A couple of weeks ago Joel and I had a lot to do and we asked who was willing to keep an eye on Gavin, so that we could get some things done. Well, all the boys wanted that responsibility, so we made a deal with them.

We have several big trees on our property and they are always losing their branches. One of the boys' chores is to pick up all the sticks before the lawn can be mowed. The boys do not like this chore at all! They complain about it and take forever getting the job done! Anyway, we said that whoever picks up the most sticks in the fastest time gets to keep an eye on Gavin for us. I didn't really think that this would motivate them much, but it actually did! They all went right to work and picked up those sticks faster than we had ever seen them do it! Who would have thought that a prize of hanging out with Gavin would make them work hard?! I would have thought of this a long time ago, if I had known! Since they all did so well, they all got the privlege of helping to watch Gavin for us.

It's wonderful to see the love that they have for Gavin! This makes me happy since I have worried about the consequences of them having a brother with special needs. The love that they show to him, shows me that I have nothing to worry about! They love Gavin just the way he is! What a gift!


"Let brotherly love continue. Do not forget to entertain strangers, for by so doing some have unwittingly entertained angels." Hebrews 13:1-2
Posted by The VW's at 8:55 AM

Love it!! You have wonderful boys and there was no question in my mind that they would embrace their relationship with Gavin and see it as a gift!
Love,
Julie

This might be the most precious brotherly story I've ever heard! How proud you must be of your boys...I know I am! :o)

Thanks for sharing this story. It totally made my day! (((HUGS)))

Two thoughts as I read this: the power of brother love, which Gavin obviously responds to, and the blessing of godly parents. What beautiful pictures!

The photos are amazing!

What sweet boys! I have a lot of similar pictures of my girls too. I worried a lot about how Josie would react to Marie's needs, but she amazes me.

Each one of those pictures brought a smile to my face! What compassionate, loving boys you have, and what great men they will become.

Also, I have that song stuck in my head too... I'm working on getting Josie to pick a new one, the way I'm humming it all the time is driving me crazy!

How did the apple cake turn out? Was it a hit at your house?

Your boys are all so cute.

oye this is so sweet! I think I will try that on the boys and see their reaction! I love the photos, so sweet! How are you my friend, think of you often!

What sweet big brothers Gavin has. You and Joel have done an amazing job raising such beautiful, kind-hearted sons!