Trying to stay wrapped up in His peace!

Lastnight wasn't such a great night for Gavin and I. He has had a cold and I thought he was getting better, but during the night he was quite fussy and having a difficult time. He was coughing a lot, had labored breathing and his oxygen saturation wasn't as high as it normally is. I was quite concerned! One of my biggest fears is the need for him to go back in the hospital and lastnight it was looking like he might be headed there soon. I was already feeling quite anxious because I was trying to do too much the last week and I was focusing too much on wordly things. So, needless to say, I was not in great shape mentally to deal with this too. I hate that I fear so much when it concerns Gavin! I hate that I let it overcome me sometimes! This is what was happening to me lastnight.

As I was sitting up with him during the night, Caleb woke up, as well, to tell me that he had had a nightmare. I told him to join the crowd and snuggle with Gavin and I on the couch. So, here we were, sitting there with me anxious, Caleb scared from his dream and Gavin not feeling very well. The next thing I know, the furnace kicked on and I got this overwhelming feeling of peace. I was in a warm home, I had two of my boys to snuggle with and all was great with the world! Perspective is so wonderful! It amazed me how peaceful I felt after feeling so anxious just minutes before! It made me start thinking about how caught up I can get in wordly things! I realized that besides being worried about Gavin's health, there really wasn't any reason for me to be feeling so anxious! The other things just don't matter! I had to go through a difficult night to figure this out, but that's how us humans are sometimes! What really matters? God's word and plan for our lives really matter! That we try to glorify Him and trust in Him really matters! The rest is just small stuff really!

Today I feel a lot more at peace. I'm trying to focus on Him and not the things of this world. Gavin is still coughing and his oxygen sats aren't what they should be, but he's doing better and I know that God has everything figured out for me already, so what's the use in worrying?! I would appreciate it if you would pray for Gavin. Pray that he gets better soon and that we won't have to put him on oxygen(he hates this!) and that he can stay out of the hospital. While you're at it, pray for our country as it makes some very big decisions tomorrow! And, remember to rest in the peace that God is already there and has a plan for our country and all of us!

By the way, here are some pictures of the sick little guy today. He doesn't look too sick does he?! He is, but it's good to see him happy inspite of it! Oh how I love him! 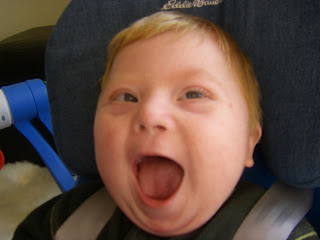 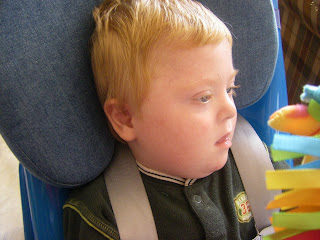 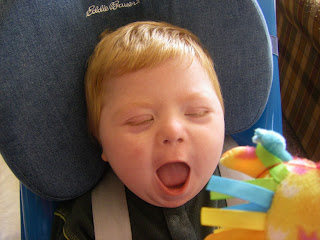 "And we know that all things work together for good to those who love God, to those who are called according to His purpose." Romans 8:28
Posted by The VW's at 12:52 PM

It is so hard to find peace when first you are up in the middle of the night, and second the fear of living in the hospital is looming over you like a giant monster.
Hang in there Gavin, you are so handsome, and your smile is toooo cute!

Sorry to hear that the three of you had a rough night. Praying that Gavin feels better soon (love the pictures -- it's amazing how resilient kids can be). Thanks, too, for sharing your thoughts on the evening and putting things into perspective for us. I, too, find myself getting caught up in the unimportant things -- just human nature, I suppose. Thanks for reminding me of what's important. Love you!
Kimberly

Very well put. I think that's where I've been too, too caught up in things that don't matter much. I need to just Be Still, and know that He is. Thank you for a wonderful reminder, and the pictures! I want to scoop Gavin up and hug all over him! We'll be praying for your sweet boy!

Vander Wall family-we will keep Gavin in our prayers. We pray that he gets over his cough soon and he will stay out of the hospital. We pray too for your continued peace. Worrying does us no good, we do have to rely on God and his word. That will give us the peace we need to get through. Gavin's pictures are adorable!!!!!! Keeping you in our prayers. Love, The Hilton's

Feel better soon, little sweetie! We are praying for you!

How handsome and happy he looks, even when sick! I hope that Gavin is doing better today and you can all get some sleep.

You gotta love those warm family cuddles though. :)

I'm glad you found peace again ... those moments are really tough aren't they? I will pray for you and for Gavin (and for dissipated nightmares for Caleb!) but as you say, Gavin looks like all he wants to do now is rock n roll!!!

My thoughts and heart are with ya girl! Loving ya from afar!