This is not the post that I had intended to have you read next. I started typing one on Friday, but ran out of time and am now just getting around to finishing it. When I read it this afternoon, I thought to myself; "How negative!" and erased it. It was titled "Caution: Negativity Ahead", but I didn't realize just how negative I was feeling until I reread it. I was feeling quite down at the time and I am still feeling sad about some of the things that I was then, but I am feeling a lot better than I was.

Some of the things that I was feeling sad about are as follows:

Obviously, I was worried and sad about what the growth that Gavin has, could possibly be. I'm still worried, but know that I can't change anything by worrying, so I've relaxed a little bit. We still don't have results of the biopsy and the doctor's office is now saying that we may not know until Friday.

I was also feeling sad about Gavin's development. Last time I told you how sad it is to watch Gavin have to suffer so much, but it's also sad to have to watch him not develop further either. I feel so sad when I see other children his age. He is SO far behind and will be all of his life. The saddest part is that he didn't have to be this far behind. If mistakes weren't made in the hospital, he would not have had a stroke, which did so much damage to his brain. I see other children with Down syndrome and it kills me to think of how much he could be doing right now, if the stroke hadn't occured. Gavin can't do anything for himself and it's really hard to watch your child be like this, especially when it could have been quite different.

Another thing that I've been sad about is how lonely it is raising a child with special needs. People don't and can't possibly get what it's like. There are other moms that I know who "get it", but they are busy raising their own children or so far away that it's impossible to really support one another. Plus, I have to stay couped up so often, trying to make sure that Gavin stays healthy and that's really difficult on one's psyche, especially in the Winter months. I have been blessed with a lot of support from our mothers and some people that I never even thought would be there for us. But, I also feel like we've been forgotten or deserted by some people, who I thought would have definitely been there for us. It's a life changing thing to have a child as fragile as Gavin has been. Everything changes and that is hard to accept sometimes, on so many different levels.

Anyway, these are just a few of the things that I had so negatively wrote about on Friday, but did not post. Saturday I was still feeling very sad and negative, but when I got Gavin dressed for the day, my attitude got a little bit of a lift. I dressed him in his "Half Full" shirt, which got me thinking. Here is a picture of him wearing it: 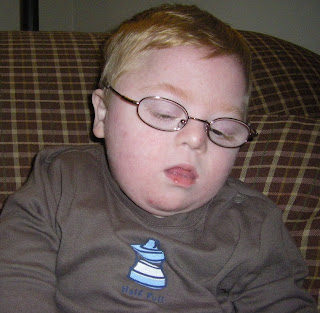 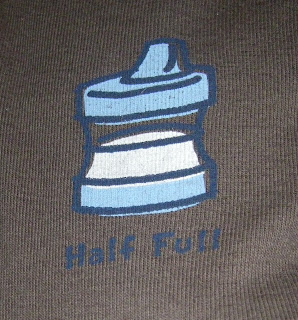 At first when I put the shirt on him I thought to myself, "A picture of a sippy cup! How dumb! He can't even drink or eat by mouth!" (See, I told you I was feeling negative!) Anyway, then I started thinking about what the shirt really meant. Usually I can truly say that I'm a "cup half full" type of person, but last week that was not the case. I was looking at everything with a "cup half empty" type of attitude. I hated the person that I was last week! So, after I put the shirt on him, I started thinking about why I was feeling so negative. Yes, I do have actual reasons to feel sad and worried, but should I really have had such a bad attitude about it?! NO! Are there things that I can't change that just don't seem fair compared to what others might have? Yes, but that's still not a reason to feel as bad as I did! I have been blessed with so much and instead of thanking God for ALL that He HAS given me, I chose to focus on what I thought wasn't fair. I can feel sad about things, but I should always remember to thank God for everything as well! Now that I'm back to thinking more clearly, I once again can see that, not only is my "cup half full", it's OVERFLOWING! Thank You, God, for Gavin! Thank You for making him just the way that You want him to be! Thank You for the trials that You have given me, because I know that suffering is actually a gift from You! Thank You for loving me enough, even though I'm not always very lovable, to forgive me and always give me what I stand in need of! And most importantly, Thank You for sending Your Son! Life IS Good!


Jesus said, "I am the resurrection and the life, He who believes in Me, though he may die, he shall live. And whoever lives and believes in Me shall never die." John 11:25-26
Posted by The VW's at 4:54 PM

We'll keep praying for Gavin and you as well. It's a never-ending struggle, trying to see through the glass half-full. I'm sorry it's taking so long to get those test results back.

As the mom of a special needs kid, I think I know what you mean. I am usually an optimistic person, but I get into these funks, I see only the bad things, like: He is going to be sick until he dies from this. I am going to have to help him for the rest of his life. It's not fair for a kid to have to go through so much. Etc.

Then I come to my senses and remember how much we have to be thankful for. Sometimes it sure feels like I'm never going to get my head above water, but eventually I do, thank goodness!!

Not sure what my point was here other than to commiserate, but there you go. :)

You have every right to negative. If I'm feeling down I go to your blog because I know I'm going to read your wise words and feel better--and even thought you are negative this time you spoke to me with the "glass half full" message. You are a great person and everyone needs there moment to be negative---I have mine way more than you can imagine.....but God is good and "everything happens for a reason". Keep your head up---Praying for the test results to be good results.

Love you all---
April

Alicia - You have inspired me since you found me in carepages so long ago. And while each of us have different journeys I think there are so many of us out here that have those days and weeks too. I remember seeing other kids with DS looking so much more healthy than Peter and I was almost mad that they got health and we didn't. God has blessed us much, but it is hard sometimes to not focus on what we don't have instead of what we do have....but we all do it despite our best intentions. I wish I was closer to give you a break - but I do think you need to get out. And this is someone who should practice what they preach - but sometimes being in the house all the time gets me to the point that I feel like I am going crazy. I would love nothing more than to not have to work - but I do telecommute from the basement and I get that sense of being trapped and I feel despair. I usually realize after I have had to travel to Denver for the day and realize how that time away has cleared my head - so looking back I realize how grumpy and down I became. Anyway - my kids are going crazy in the kitchen, and I can barely focus as I try to type this....so really what I was saying is - you are not alone, we all have the ups and downs you've talked about. I know you feel blessed to have Gavin, but don't forget how blessed he is to have YOU. Grab a friend and go get a hot chocolate somewhere.... or better yet - run off to a bookstore by yourself and read all the magazines on the rack and then go home.... I've done that a couple of times!
HUGS!
catherine

Hi Alicia,
You had visited my blog a few days ago and so I thought I'd check yours. Your little guy is quite the cutie. I'm sorry you're feeling in a little of a slump. I know how you feel. My husband and I have felt that way many times ourselves. We too have questioned the decisions some of doctors had made when our little girl had gotten so sick when she was young. I'm not certain she would have had the severe brain bleed she had if they would have made different decisions. What I have tried to teach myself on those hard days is that I really am thankful that Isabelle is alive. Yes, she is not what I expected her to be, but the love I feel for and from her is more than I ever expected. I will be praying for both you and your son. Hang in there!

Its ok to be negative at times. The blog is a great way to get it out and by the time you are done you find the good in every situation. Don't be hard on yourself for being negative once in a while. Its only natural. Wish we lived closer so we could visit more. So sorry I haven't made a better effort to see you guys. Even though we aren't there you are ALWAYS in my thoughts and prayers.