On this day, that seems to revolve around hearts, I thought that I would give all of you a little lesson on the organ that we call the heart. Not only is it Valentine's Day, but it's the end of an important week (February 7-14) that raises awareness to Congenital Heart Defects. It's funny how this day takes on a whole new meaning when you have a child that was born with a heart defect! The heart becomes so much more important to you than you ever thought that it would! 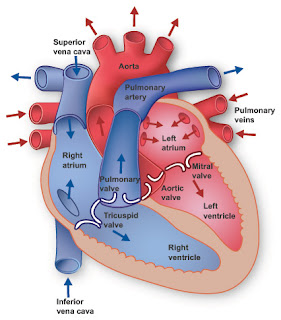 Congenital heart defects happen because of incomplete or abnormal development of the fetus' heart during the very early weeks of pregnancy. Some are known to be associated with genetic disorders, such as Down syndrome, but the cause of most congenital heart defects is unknown. While they can't be prevented, there are many treatments for the defects and any related health problems.

How a Healthy Heart Works

To understand more about congenital heart defects, it's helpful to understand how a healthy heart works. The heart, lungs, and blood vessels make up the circulatory system of the human body. The heart is the central pump of the circulatory system, and consists of four chambers — the left atrium and left ventricle and the right atrium and right ventricle.

The heart also has four valves that direct the flow of blood through the heart:

The left atrium of the heart receives oxygen-rich blood from the lungs and then empties into the left ventricle through the mitral valve. The left ventricle pumps oxygen-rich blood out to the rest of the body. Blood leaves the left ventricle through the aortic valve and enters the aorta, the largest artery (a blood vessel that carries oxygenated blood) in the body. Blood then flows from the aorta into the branches of many smaller arteries, providing the body's organs and tissues with the oxygen and nutrients they need.

After oxygen in the blood is released to the tissues, the now deoxygenated (oxygen-poor) blood returns to the heart through veins, the blood vessels that carry deoxygenated blood. This blood, which appears blue, enters the right atrium of the heart and then travels across the tricuspid valve into the right ventricle.

The right ventricle then pumps deoxygenated blood through the pulmonic valve into the lungs. The oxygen in the air we breathe binds to cells within this blood that is being pumped through the lungs. The oxygen-rich blood, which appears red, then returns to the left atrium and enters the left ventricle, where it is pumped out to the body once again.

This is the normal pathway that blood travels through the heart and the body. However, abnormalities in the heart's structure — such as congenital heart defects — can affect its ability to function properly.

The following defect is the one that Gavin was born with:

Gavin's defect has been mostly repaired, except for his mitral valve. The surgeon, although trying twice to fix this, was unabe to repair it. This means that he still has a moderate to severe leak in his mitral valve. So far his heart in keeping up with the demands of his body, but most likely he will need to have a mitral valve transplant some day.

Fortunately, many infants are recognized to have serious heart disease even before birth on ultrasound tests. A fetal echocardiogram is a specialized ultrasound that allows doctors to see the baby's heart in great detail and plan the best care for the baby while still in utero.

We did not know that Gavin had a heart defect or Down syndrome before he was born. I had a nagging feeling that something was wrong throughout the pregnancy, but the ultrasound showed nothing to be wrong. So, we were quite surprised when Gavin was born having both of these issues. The outcome would not have changed anyway and we would have continued on with the pregnancy no mater what, knowing that EVERY child is a gift from God. I am actually happy that we did not know about these issues until he was born.


Signs and Symptoms of Heart Defects

Because congenital defects often compromise the heart's ability to pump blood and to deliver oxygen to the tissues of the body, they often produce telltale signs such as:

-a bluish tinge or color (cyanosis) to the lips, tongue and/or nailbeds
-an increased rate of breathing or difficulty breathing
-poor appetite or difficulty feeding (which may be associated with color change)
-failure to thrive (failure to gain weight or weight loss)
-abnormal heart murmur
-sweating, especially during feedings
-diminished strength of the baby's pulse


So, there you go! Hope that you enjoyed the lesson! Be thankful for a healthy heart! 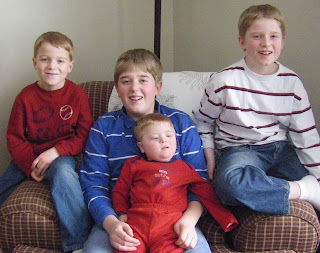 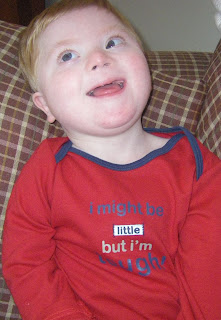 What an awesome way to share Valentine's Day with everyone .... I know that diagram all too well.Beautiful picture of all your beautiful Valentine's.I love Gavin's sweet smile.Hugs and kisses from California.

The Myers Family would like to you the Vader Wall Family a Happy Valentine Day.May God bless every day aand Gavin too. He is a very specially little man

Great pictures of your boys. Hope your Valentine's Day was fun (and relaxing).

Look at that great smile. We didn't know Jax had downs or a heart defect before he was born either. We found out in October that his mitral valve is leaking more so it will probably need to be replaced soon. Your blankie is on its way, look for it!

Happy Valentines Day!! Thank you for sharing such a great lesson!

In spite of his "heart challenges," Gavin looks great! It was good to see him and you at church yesterday. Wish we could have talked more!

That photo of Gavin is quite possibly the best one I've ever seen! LOOK AT THAT SMILE! Great lesson on hearts, considering he stole mine. :o)

I love you all...with all my heart.