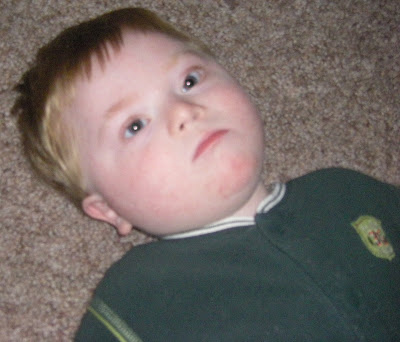 Today I'm coming to you asking for prayers. Gavin has been doing so well lately, yet there are still things that concern me and that make me wish for more. We feel so very blessed to have Gavin in our lives and are so thankful for the health that he has been having and the progress that he has made lately! Still, I think of the dreams that I had for my once unborn child and feel sadness knowing that many will never come true.

It is very difficult knowing what Gavin should be doing at this age and seeing the level that he is actually at. He is almost 2 1/2 years old, and yet he is at about a 2 month level developmentally. This is SO hard to accept some days! I see other children at the store and I watch them closer now than I did before I had Gavin. It amazes me what such little ones can do! At home I am able to see Gavin's achievements, but out in the real world I see how far behind he is!

I'm asking for you to pray that Gavin can remain as healthy as he has in the past year and that he can remain seizure free. (This week I saw something that looked like it could be a seizure from him. It was a different movement than the type of seizures that he had in the past, but it was a movement that was not normal for him. It freaked me out and brought back very anxious feelings that I felt when he was still having seizures. He hasn't done this movement since and I'm praying that he doesn't do it again!)

I'm also asking for you to pray that Gavin can, one day soon, be able to sit up on his own. He definitely has more strength than he used to, but he is still very floppy and has very weak head and upper body control. It would make life so much easier if he could at least sit on his own one day! We don't take Gavin out very often since he has a low immunity, but it's also because it's just too difficult when we do. His not being able to support himself at all makes it quite exhausting to go places with him. I feel like I'm complaining, but this is not my purpose for this post. I'm just giving you an idea of how life is with Gavin and asking for you to pray for him and us.

I am so proud of the accomplishments that Gavin has made, despite predictions that many doctors have made for him and I am VERY grateful to God for these accomplishments! And yet, I can't help but feel a great loss for my child and our family as well! I've been told that Gavin doesn't know any better and that he is happy and loved. I know that this is true, but he has also had to suffer so much and I've had to watch this and it's hard! I've also been told that we are blessed to have 3 other children who are healthy, and while I know this and feel this too, it really doesn't make it easier knowing that Gavin's life is the way that it is! I've also been told that since Gavin has Down syndrome, his life does not amount to as much as an average child! (Seriously, I've been told this!) He is still a child! He is my child and it hurts to have a child who's dreams that I had for him won't come true! There is a feeling of such loss and these feelings don't just go away because we are blessed in SO many other ways!

God made all of us, God made Gavin and God does NOT make mistakes! There is a great purpose for all of our suffering, but it is still suffering, which is why I struggle some days. Please pray that Gavin will continue to progress and stay healthy and that we can stay at peace with God's purpose for our lives. Thank you!


"For I consider that the sufferings of this present time are not worthy to be compared with the glory which shall be revealed in us. And I know that all things work together for good to those who love God, to those who are called according to His purpose." Romans 8:18 & 28
Posted by The VW's at 8:50 AM

I am totally in your boat. It drives me crazy when people ask about Jax. I had lunch with another downs mom who's little boy is one month oler than Jax, and he walks. He even talks a little and signs like crazy. Even though I love this little boy, it made me so sad to see where Jax should be right now. He is at a one month old level, so they are about the same. How did Gavin have his brain injury? What happened.
I pray that our babies will someday sit up on their own and walk with everyone else. Amen

I pray for Gavin--and all of you--every day. I'm praying that someday you will post a picture of Gavin sitting up by himself!

My dear Alicia,my heart ached for you as I read this. As with every word, I so understand where you are coming from.Funny how we become part of a sub set even within the Down syndrome community.I tell people that it is not that I long for the typical child but sometimes it is about the "typical Down syndrome" child.It is beyond difficult to watch other children,yes even Down syndrome children,crawl,walk,talk sign and even go to preschool.It is only those of us who watch from the outside who can truly understand this.When we run down the list of all the things our children have had to endure it is very difficult to not feel some sadness.However,it is by our faith that we know that these children were not sent to us because of some innate strength we as parents possessed,they came instead to teach us and show us what we actually were lacking.And show us they did.They came as gifts that others should envy because these children's presence in our lives,our families lives,has proven to change us and touch us in ways we could have never,ever possibly otherwise known.Gavin is a fighter.Just like Zoey,just like Jax,just like all the rest of these amazing souls that grace our lives daily.He will get there.Where becomes the question we search for but in the end the fact that they are here is a miracle.Zoey's delays are significant.Most don't see it from pictures.But her road was paved with a few more bumps than seemed fair.Gavin's as well.But look at their resiliency.Their strength.They are our inspiration everyday.As for people and their ignorance :I could write a book containing the thoughtless things people have said.I like when people ask questions but sometimes if they don't think before they speak I wish they had not chosen to speak at all.Let it go.Hard as it is, just let it go.I will pray for Gavin.I do pray for Gavin,for all of you daily.You are doing a great job.You are an amazing mom and I feel privileged to walk alongside you on this journey with our miraculous children.Peace and strength to you my friend.

I am so sorry. It is hard to deal with the delays our kids tend to have, but they are exactly who they were meant to be; behind or ahead. He was sent to YOU for a reason!

I wanted to let you know about the T21 Travelling Afghan Project! I hope you will consider participating and I would appreciate it if you could help spread the word! Thanks!

You are on my heart today, I to watch other children very closely, it is so hard to see what your child could be doing, and hard to be thankful for what they are doing.

Im so glad Gavin has been so healthy this year!

Thinking of you today.

I keep Gavin in my prayers always!

You should always pray for more for Gavin (for our sick kids). Even if they reach a goal - always ask for the next- be greedy with your prayers! HE wants you too!

I feel your pain sister. Hang in there sweet mama. It is so hard seeing other kids do the things they are supposed to while yours is not. I struggle with the same thing.
Thanks for stopping by our blog and leaving such sweet thoughts. I hope you have a great weekend.
Blessings,
Christy

As parents, we want life to be good to our children and it breaks our hearts to see them struggle and know they have so many obstacles to overcome. I wouldn't change my Landon for anything, I love and adore him for who he is, though I do wish things could be easier for him. And things have been much easier for him than Gavin, so I hold hope in my heart that your Gavin will stay healthy and thrive so you can see him crawl, walk and run!

ohhh I know your heart friend! This is such a difficult thing to embrace daily! Funny I think we were on the same heart page. I too was thinking of Abbs and where she is the other day. I am thinking of you and praying for you and this little warrior! Love you so!!!

You got it in one : God made all of us, God made Gavin and God does NOT make mistakes!

I have been following Gavin's blog for almost a year now ... and I can see distinct progress.

Its his Mama who has done a brilliant job of nurturing his achievements ... Well Done!!