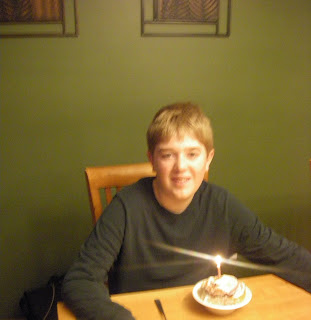 We love you and are very blessed to have you as our son! Now would you please stop getting older and taller?! And, Have a great day!

He has had a great day! He has been off oxygen so far today except for when he was sleeping. As soon as he goes to sleep, his sats drop immediately. It's almost as if he has sleep apnea, but he's had a sleep study and he passed it, so hopefully it's just this illness that is causing this.

The doctors have decided that this is probably a case of bronchitis that was exasperated by his having congestive heart failure, which he has due to the leak in his mitral valve. He probably had too much fluid on the lungs and just couldn't handle the illness because of it.

He has made great improvement over the last 24 hours, so hopefully we will be out of the hospital real soon! He didn't even need to wear the breathing mask over night, just the nasal canula! A HUGE turnaround! I am very happy about this! 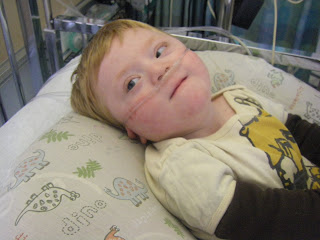 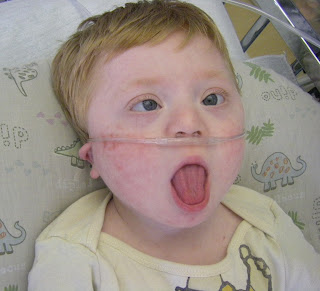 Gavin without the oxygen on today: 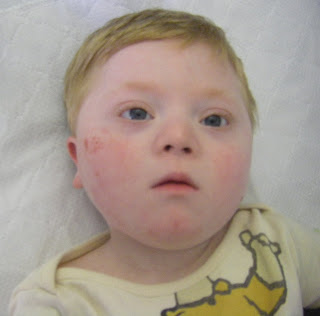 Keep those prayers coming! And, Have a great weekend!

Happy Birthday Jacob!!! Wow 13!!! Hope you had a great day. We are so glad to hear Gavin is doing so well. He is one tough little guy! We pray he continues to improve and the oxygen will be able to come off very soon. God is our refuge and strength. Ps 46:1. Love The Hilton's

Good news on the Gavin front.Hoping the next stop is home!

Wow what a quick turnaround. I love that pic with the tongue, I might have to steal it and put it on my computer, he reminds me so much of Jax

Happy Birthday Jacob! It looks like you have a great young man and you should be so proud.

So glad to hear Gavin is improving so. Hopefully you'll be home soon.

As for the O2 when sleeping, I know that Marissa and Gavin are very different on the respiratory front, but Marissa ALWAYS requires O2 when sick and sleeping. It sounds as though he is making progress though because of the switch from mask to cannula.

Have a good weekend and I hope the next update is from home!

I am so happy. let your cheeks heal now!

Happy Birthday Jacob! I am so glad that Gavin is improving!!! I pray you guys come home this weekend!