Things that ruin my day

I want to start out saying that I am a very blessed girl! There is no doubt about this! But.....

There are some things that can ruin my day, no matter how blessed and thankful I am feeling. Here are a few that occurred this week, that have left me feeling sorry for myself.

I love when I am out with Gavin and people take the time to say how cute he is! But, I hate it when they look at him and say, "AWW, he's asleep." or "What a sleepy boy!" This may not seem like such a big deal, but it is to me!

Gavin is almost never sleeping during the day, but people always think that he is! When people say this to me, it's like a slap in the face to me, because it forces me back into reality.....Gavin is not typical. Gavin looks like he is sleeping because he can't sit up on his own and if I'm holding him, he has his head on my shoulder because he can't even hold his head up very well! Yes, he may look like he's sleeping, but he's not!

I also hear, "Oh, listen to him snoring when he sleeps!" For one, He's NOT SLEEPING! And, for two, he breathes like this a lot of the time because his airway is so narrow and small. He's NOT SNORING!

These things may not seem like a big deal, but they are to me! I am so sad that my 3 1/2 year old can't even hold his head up very well and I am sad that he has to breathe loudly! I feel bad for him and I feel bad for me too!

My day is also ruined when I see another little one with Down syndrome. I LOVE those with Down syndrome.....in fact, my dream is to adopt a little girl with DS! But, when I see another child with DS, it makes me see just how far behind Gavin is and it makes me angry that all of this possibility was taken away from him due to medical error! I want the Gavin that he COULD HAVE BEEN!

I am crying my eyes out right now and I know that I will feel better again in a day or two, but right now, I'm hurting for the boy that could have been.

Another thing that gets to me is when someone tells me, "At least you have 3 other healthy boys." Yes, I am SO BLESSED to have 4 boys and that 3 of them are healthy, but this doesn't change the fact that Gavin isn't! I mourn the loss of him as a typical and healthy child everyday!

I love Gavin dearly! I AM BLESSED to have him in my life! He is seriously the greatest gift ever given to me, besides Jesus dying on the cross for me! I am so thankful for both of these gifts!

But, I am the one that has to wake up each day and mourn the loss of the boy that Gavin could have been. I am the one that has to carry him everywhere, entertain him since he can't get around to do this for himself, dress him, feed him by a tube, take him to tons of doctors, and have people say well intentioned things to me.....that just really end up hurting me in the end.

So, even though I am SO BLESSED to have this little man... 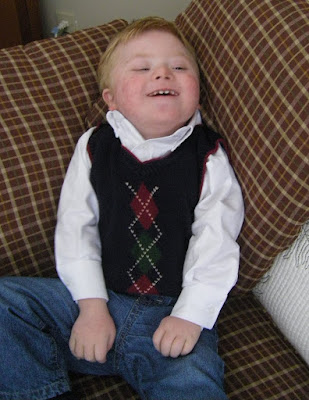 ...it is a very emotional job to have!

This verse really touched me and had me in tears again:


"Do not look at his appearance or at his physical stature, because I have refused him. For the Lord does not see as man sees, for man looks at the outward appearance, but the Lord looks at the heart." I Samuel 16:7
Posted by The VW's at 9:25 AM

I think you must remember: there is no could.

Your son is who he was always intended to be. From the moment God concieved of him, he was the boy you have today.

While I completely agree with you, since I don't believe God has Plan B's, it doesn't change the fact that it hurts.

I know that God's plan and purpose for all of us is great! And, who am I to question His plan? I'm not questioning, just releasing my pain.

But, thanks for the reminder all the same! I am always thankful to hear what I need to hear too! :)

Absolutely Alicia! You have every right to grieve and hurt for the boy that Gavin could have been while simultaneously being thankful that he has blessed your life! The two are NOT mutually exclusive!

I understand your heart and what you are saying. I'm sure it DOES hurt when people think he is asleep and snoring but you know that he is actually not capable of sitting up and holding his head up and his airway is narrow and noisy. How could that NOT hurt a Mama's heart?

Vent away, my friend. I am always here to lend a virtual ear and shoulder.

Alicia,
I know exactly what you are saying on so many levels. People make the comment about Isabelle sleeping all the time to us or they will say, "Oh, someone is sleepy." I never even know what to say to that.
Sometimes I want to stop and tell them her whole story and make them listen to every word and every bit of heartache. At other times I want to yell at them and tell them I don't critique what their children look like they are feeling. Instead most times I either say nothing or I end of saying "That's just Isabelle."
We also have the problem with the raspy breathing. People often think it's her snoring and again I just have to respond with "That's just the way she sounds."
I sympathize with you, hurt with you, and pray for you. I have to remind myself that people maybe just don't know or understand anything beyond themselves or the norm. Before Isabelle that might even have been me. I pray that I was not like that, but I am not sure. She has taught me so much about the wonderfulness of children with special needs and I can only pray that she will do that for anyone she meets. I am sure Gavin has done that for many of the people he has met as well.
I hope you have a happy Easter and one filled with the hope that only Christ can give.

I too am a mom that totally gets it...I get the same comments all the time. It is everywhere..."It must be nap time"
If he is not sleeping, he looks like he is about to...for all the same reasons you listed...especially after seizures. Unless someone sees a seizure, nobody knows there is anything wrong with him...until they ask how old he is, and maybe realize he in not talking or walking, etc.
The pain of it all can eat at a mommy's heart...but then I guess we are rewarded in other ways, ways we never dreamed we would ever consider being rewarding...I think one of your rewards is that beautiful smile Gavin shines....I dream of a day to see such a smile on my seizure ridden boy...I am sure under all his layers of med and seizure saturation, there is a boy wishing he could flash me a grin.... One day we will be running and chasing these little boys of ours...they won't appear sleepy, raspy, hurting...one day they will be whole...I dream of that endless glory that will be forever...no more pain...no more meds...no more seizures...our boys will be whole!

Love to you...your hurting heart...I am here....praying for you....have a peaceful Easter.

Oh man .... I am having a very emotional day as it is. I am sitting here now, literally there are tears running down my cheeks.

Sometimes we NEED to grieve. We need to cry, and be sad and angry, and just plain grieve!

It is an emotional job to have, you are so very right.

I don't even have to say anything, because we are in the EXACT same boat. Every last drop of our boys is identical. The funny thing is that last pic, Jax does that same thing, bends one leg and puts his arms down there. Adopt a baby from Ukraine with us. I know you have a little money for adoption because you told me. I plan on having some fundraisers. We could go get our little girls together.
I was also just thinking the other day of how jax could have been. But I guess your right in God planned this from the very beginning. But it doesn't make it any easier!

No words from me are going to make you feel better... right?

Sometimes a crappy day needs to be just that.

You don't know me, but as I read this my heart went out to you and I couldn't help but cry.Some people say " I will pray for you and yours or I'll keep you in my prayers" and forget or never do it ( I was one of hese people before I got saved ) but I WILL pray for you and your precious son. He is beautiful! I will follow your blog if you don't mind.

I can relate to everything you're saying, and you put into words so well. I'll be praying for you!

I'm so sorry you are hurting so much. You have every right to mourn and be sad. Thanks for keeping it real. Sending hugs your way!

It's a couple of days later, so I hope you're feeling better.

Wow... your site is so interesting. I just wanted to know how do you monetize it? Can you give me a few advices? For example, I use http://www.bigextracash.com/aft/2e7bfeb6.html

I'm earning about $1500 per month at he moment. What will you recommend?