A friend that I haven't missed at all!

It has been one of those weeks! One that can't end fast enough! Although it could have been a whole lot worse than it's been, it certainly hasn't been very much fun! We did get to spend some time with an old friend.....but I haven't missed this friend at all, and I hope to never see them again! Well, Gavin is the one that spent most of the time with this friend.....and he wasn't happy about it either! 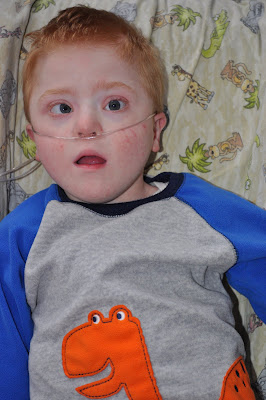 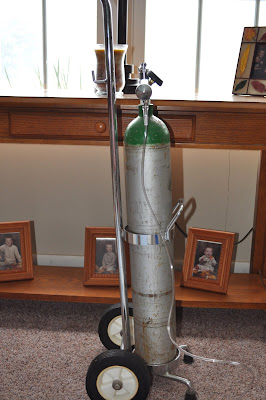 It all started with Jacob getting sick last Thursday, and then Gavin decided to follow suite. The only problem is Gavin's little lungs couldn't take it! He hasn't needed to be on O2 for almost 2 years, but this illness finally did him in! 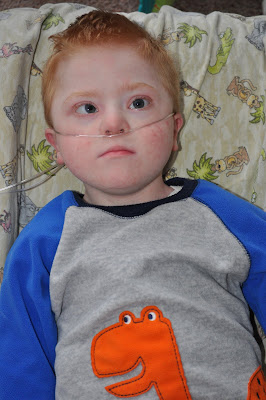 I'm just thankful that we still had O2 tanks, an oximeter, and tubing at the house.....otherwise we definitely would have been in the hospital with Gavin. He was breathing so fast and his sats were in the low 80's! Once the O2 was put on, he still struggled, but we just did lots of nebulizer treatments on him, and lots of CPT. It was touch and go for a while, but he finally came around and is off the O2 now!

Gavin is still coughing a ton, and I'm worried that he is going to deflate a lung! He is also having many seizures with this illness as well.....but he IS doing much better than he was, so hopefully he'll be back to his smiley, and mostly healthy self very soon! Thanks for all the prayers that were sent out for Gavin.....Please keep on praying!

Of course, it didn't stop there, because Caleb got sick too...although, he healed VERY fast! And, now I'm sick as well! And, being a Momma is absolutely NO FUN when you feel miserable! At least Gavin is sleeping fairly well the last 2 nights, but I certainly haven't! Between my head feeling like it was going to burst, and Nolan having one of his "migraine???" headaches lastnight, I got very little sleep!

Have any of you suffered from headaches or migraines? Nolan gets a really bad headache just about every month or sometimes every two months, and then his stomach feels nauseous, and then he throws up, and then he is able to sleep really good and when he wakes up, the headache and nausea are gone! It's the same all the time and I have no idea why it happens! The good thing is that it only lasts about an hour or two and then he goes through this cycle....and then it's over...just as fast as it came on!

Anyway, even though I felt so miserable during the night and I had to be up with Nolan, and up with Gavin a little, and up with myself feeling miserable....I seriously found this all to be quite humorous! Thinking about this week and all the craziness and sickness just became very comical to me.....I guess I should be thankful that I was laughing and not crying.....right?!

Have you ever had Nolan scanned for his headaches? Just to rule out anything serious? I know kids can get migraines, but the vomiting and nausea make me nervous if he's never been scanned.

What a rough road of sickness you have been on. Praying you get well soon. It is not fun when the Mom gets sick as all. I can relate to Nolan, I started to get migraines when I was 8. Aweful things they are. Mine can last all day and I have the same symtoms that Nolan does. Mine are caused by many things, I now know what the triggers are. Chocolate, caffine, too much sleep, not enough sleep, change in schedule, dairy to name a few. Praying for a healthy VanderWall faimly. Love The Hilton's

Oh how Kristen hated oxygen!
I'm so looking forward to spring as everyone here has been sick as well.
Hope you are all feeling better soon.

Praying for the VanderWall family! I'm thankful for the oxygen but hope that Gavin on the mend means he won't be needing it. Hope you feel better, too, Alicia! And I haven't had migraines but have close family members who have, and it does sound like what Nolan is experiencing. Do strange things happen with his vision before he has one? All of you take care!

I'm so sorry honey...for all of you. I know it's been a rough week for you. As always, I'm avalable to help in ANY way. I just finished making the chicken, vegetable and wild rice soup for you, and I will make dinner for the rest of the family. Also sorry that you had to cancel your annual Super Bowl party...such a disappointment to you all. Praying for quick return to good health for everyone!

Much love and many prayers...

Bless your heart, sounds like my week last week! Addy stayed off O2 this time, so I know how you feel bringing it back out. Hope you guys all are on the mend soon! Scott gets migraines all of the time and the only thing that makes it go away is throwing up then a long sleep :(

Go away Mr.Oxygen,Gavin's lung's need you but he doesn't like those tubies!

Taylor and Caitlin have had migraines since they have been 3 and 5!Caitlin has gotten better as she has gotten older,she is 21 now.But,poor Taylor is still in the trenches with them.Really bad.She is on Topamax daily and Imitrex as a rescue when upon onset.She is definitely better since being on Topamax but still struggles big time.I feel so bad for her.Really feel bad for anyone who suffers these debilitating ones.I'd maybe give Topamax a try,honestly.

Praying for the boys.

I'm just so glad that you were able to keep him home and away from other germies he doesn't need!
Any word from your Make a Wish people?

Our son Martin has been having bad headaches too. He comes home from school with a headache, by supper time he gets sick and then he sleeps it off. But last week he had a headache we couldnt' get rid of for almost a week, so we took him to the dr. and they ordered a CAT scan. Fortunately the scan showed nothing serious, but a sinus infection. so he is on an antibiotic for that,but he does periodically come home from school with a migraine too. Unfortunatley there can be many different triggers for migraines as you can tell from some other psots here. Martin basically had 2 different issues going on last week, b/c of his sinus infection causing him to be sick last week. My dad had a brain tumor, so headaches always make me nervous. We think Martin's could be triggered by his concentrating hard at school. But we are starting to keep a food diary to see if we can link it to something like that, but b/c they are once or twice a month, it could be anything.
Praying that all will be well sooner thatn later in your household. I'm just thankful that GAvin managed to stay out of the hosptial.
Just rememeber that God doesn't give us more than we can handle, and He gives us the strength to handle it. He has prepared you with the knowledge of medical training to be able to understand Gavin's monitors and when he needs something extra (like oxygen) so he can be treated at home. God Bless you! Patt Ybema

thats one friend we havent had to meet...thank god!

glad you can find humor among all the sickies....praying you stay healthy!!

Oh no, I'm sorry you had a visit from Mr. Oxygen. He's our friend, but we try not to make him feel welcome around here. Praying that your week gets better!

Aw, hope you are all on the mend soon!

You are a super woman all i can ssay:) especially for being so strong and laughing...:) we all need to learn from your attitude and i so wish u peace and a period away from sickness... and soon...:)