The UFO's Have Arrived! 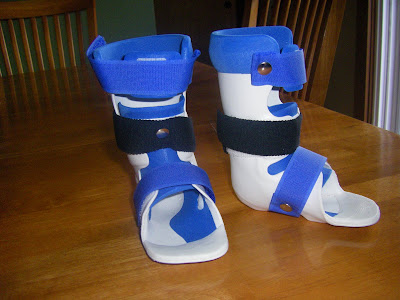 Gavin's Ankle Foot Orthotics (AFO's), or as we like to call them UFO's, are here! We went in yesterday to have him fit for them and to take them home. He is very stiff in the ankles, so it's kind of a chore to put them on and he doesn't enjoy the process, but once they are on he is tolerating them. 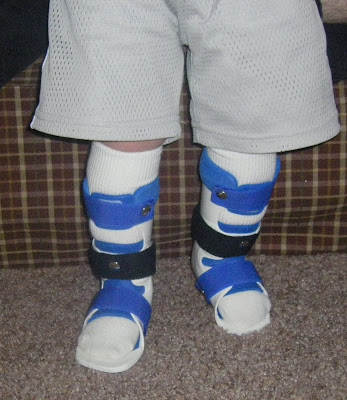 On the other hand, he is NOT tolerating them on while in his stander! 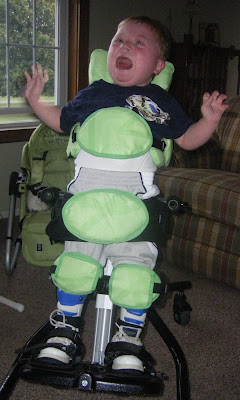 Poor baby! I tried him out in it close to bedtime lastnight, so I'm hoping this is why he was so sad/mad about it! We'll try again today and hopefully he'll approve!

In other news, Gavin has been having possible seizures again. This started a few days ago. The movements are unlike the seizures he used to have, but it's a new thing that is worrisome. Before this started, he hadn't had seizures for about a year and a half. So, I'm a little worried and discouraged!

The seizures that he used to have would be rythmic in nature and he would extend his arms out and back in in a jerking motion. He would also deviate his eyes and appear to be somewhat "out of it." This would last about 3 minutes. Then he would sometimes cry after having them and seem sleepy or go to sleep after having one.

The movements that he is having now only last for 1-3 seconds and there is only one movement involved. He starts out looking somewhat surprised by something and then his arms extend outwards and become stiff. He sometimes makes a grunting noise while doing this. Afterwards he actually smiles and appears as if nothing has happened. And, he remains "with it" throughout and afterwards.

He does have spasms or clonus daily, and I don't know if this is another form of them or if he is indeed having seizures again. His neurologist wants him to have a repeat EEG since this is something new for Gavin. Gavin and I are NOT happy about having to do another EEG! He and I HATE going in for these! I have to try to keep him awake for half the night before the procedure and they have to put all these sticky probes all over his head and wrap his head up, then he's supposed to go to sleep while they are testing his brain waves. It is SO NOT fun and such a hastle! And, Gavin usually cries and doesn't cooperate with the falling asleep during the test part. UGH!

I pray that he is not having seizures again! I hated watching him have these! Plus, this would mean that his medication would have to be increased and this makes him more sedated. He is just now beginning to be more active and alert and I don't want to have him so groggy again on a daily basis! Please pray that these will turn out to be nothing big and that he won't have to be drugged up so much again!

I love that you call them UFO's! For some reason our PT doesnt want Alex to wear these. Alex's feet turn outwards, reminds me of a duck, but still no UFO's for us at this time.
The EEG process sounds horrible. Im hoping you get the answers you want, and he IS NOT having seizures.

I love the UFO's too! So funny. And appropriate too, since many days I feel my life has been invaded by alien life forms!! :)

I am sorry to hear of the possible seizures, that must be so scary and heartbreaking. I will pray that the EEG will go as well as can be expected and that they are not seizures or anything that is harmful. I can understand that you are loving the active and alert Gavin and don't want to sedate him more. I am sorry you are having to deal with this and I am praying.

I'll be praying for you and Gavin--that you'll get through the EEGs and that the results will show that he's not having seizures.

Poor little guy! Addy responded to her stander the same way, we just had to be persistent! Stinks doesn't it! Hopefully you won't have to do another test, they are not fun for the entire family it affects everyone in my opinion!

Oh sweet Gavin .. the stander does not look fun but it will be worth it,promise.As for the EEG,I'm right there with you.Zoey has had way too many to count and each of them,no fun.For anyone.Not to mention waiting for the results.Saying prayers for a really nice looking EEG so Gavin can keep making all his forward moving,wonderful progress.

Love the UFO's! You do have a handsome little alien;) Praying for good news and no seizures. ((Hugs))

Did he have infantile spasms? Thats kind of what it sounds like. They sound a lot like the siezures Jax has. His arms flail out like someone scared the bejeezes out of him. And then he's fine. If you can get it on video and show me. I pray that its not siezures. I'm so sick of siezures I could scream.

I am sorry to read about possible new seizures. It does sound like IS, I pray it's not!

I wanted to comment on the Compleat Pediatric formula that you mentioned. I have read up on it in the past, but it won't work for Peanut. Although it is lactoser free, it has sodium caseinate which is a milk protein. We are dealing with a milk and soy protein intolerance, so we wouldn't do well on this. Thank you SO MUCH for the suggestion though! Us mammas gotta help each other out. :)

I hope everything turns out OK with the EEG. Poor guy!
Love,
Julie

Alicia,
You guys look great-the air zoo looks like fun. I think we are going to try that soon! If it is any consolation...when Parker got the exact ones in the fall-he fought me every single time. I would take them off because I thought they were hurting him. It just took some time to get used to them. We recently got to go down to the smaller SMO's and he fights me a lot less on those! I think it is a sensory thing too-I don't think Parker liked the way they felt on his legs. Anyway-just checking in and hope you guys are doing well.
Jen Carden