We are back in the swing of things around here. As you know, we came home to some disturbing things, after our time away on vacation. I am thankful to say that everything is mostly back to usual and working again!

The car is fixed.
The dryer is fixed.
The tree limbs are picked up.
The pool is miraculously no longer looking like pea soup.
The laundry is done.
And, the trampoline is still bent, but useable.

And, it actually feels good to be home again! I love going away on vacation and it's hard to return home again, but home really is the place to be! It is much easier caring for Gavin at home and it's not so exhausting, as vacations can be.

I did have a couple of things that I brought along on our trip that proved to be very valuable to Gavin while we were away.

About a month ago I showed you an item that I purchased for Gavin. At that time I also bought a couple other items for Gavin to use and they worked great for him on our vacation! The company that I bought these items from is not tailored for special needs kiddos, but I have found some things that would work great for those with special needs. So, I thought that I would share them with you.

The first item is great for kiddos who don't tolerate heat as well as they should be able to. Gavin fits into this category. He overheats very easily! He doesn't sweat as well as he should and he gets flushed very easily and becomes almost limp when too hot. Becoming too hot can also bring on seizures for those who suffer from them. Since we were going to be out in the elements a lot on our vacation, I knew that he was going to need something to stay cool. So, I bought this cool fan for him to use: 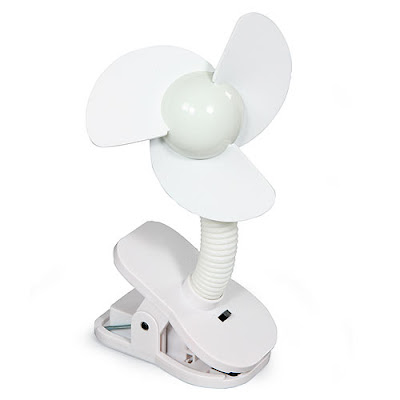 It clips onto almost anything and runs on AA batteries. It works very well, except it goes through batteries quite fast....but it's worth it, if you ask me!

We were in areas where it got up to 102 degrees outside, so having this fan, plus the wet washcloth that I carried around in a baggie for Gavin to cool off with, were invaluable to him!

Here he is staying cool with this great little fan: 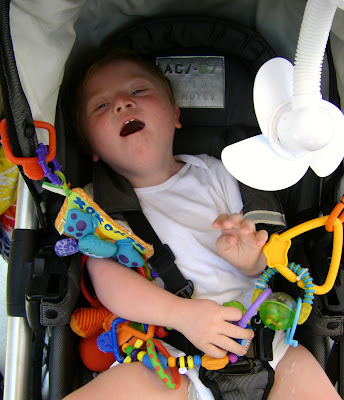 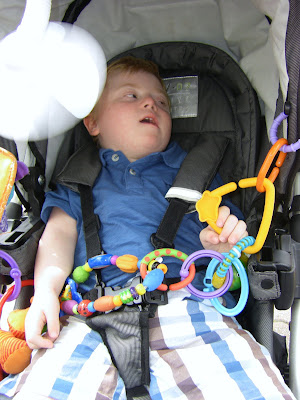 I learned that I should have bought about 100 of them, because EVERYWHERE we went people were drooling over Gavin's fan! I probably could have sold enough of them to pay for most of our trip! One guy even offered me $200 for it! I told him that Gavin was worth much more than that!

The other item that was very useful to us was this cot: 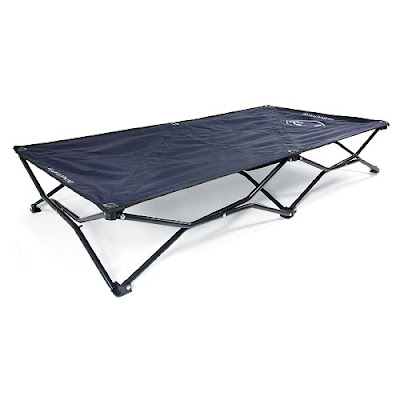 It folds up quite small in it's own carrying case and it pops up so easily for use! We used it for Gavin to sleep on and also for him to hang out on, since he is unable to sit up on his own. It's long enough that our son Caleb can even lie on it, so it will last a long time for Gavin. Here is Caleb and Gavin together on it: 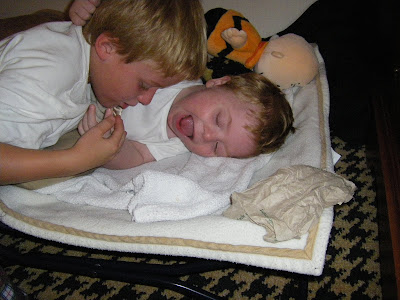 Aren't they cute together?!

On our trip I also learned, realized or thought of a couple of things:

1) Someone should invent a floor to ceiling window to be used in the back of a mini-van!
You know, like the windows they have in Limos. I would have enjoyed our trip even more than I did if I didn't have to hear Caleb and Nolan arguing, making annoying noises and asking us if we were almost there a trillion times! It would have been so nice to just roll up the clear window and have some peace and quiet! I truly LOVE these 2 boys, but traveling with these 2 active boys for over 1200 miles in a van is just about too much stimulation for this Momma!

2) Us Mommas have to improvise a lot!

a. I ran out of wipes for changing Gavin's diaper at one point on our trip and I found out that wet napkins will work in a pinch!

b. I also learned that I can actually change Gavin's diaper AND clothes while holding him and standing up at the same time! I was in a bathroom stall and there was no changing table....which he no longer fits on anyway, but it works if it's really needed....and I had to change his diaper and clothes because his tube leaked from his feeding pump and he was a mess! I wasn't about to lay him on that gross floor, so I just held him in my arms and proceeded to change him this way! It was very difficult to do and I came out of the bathroom with a sore neck and back and I was sweating like a hog, but I DID IT! I told Joel and the boys that I didn't want to hear them say "I can't!" ever again! If I could manage this feat, then just about anything is possible!

c. One last place I had to improvise was at King's Island. Joel and the older boys were riding the bigger rollercoasters and I was with Caleb and Gavin. I wanted to be able to take Caleb on a ride that Gavin could also go on, so we headed to a kiddie haunted house. It was inside and air conditioned, plus you got to sit in a cart that wheeled you around the "scary mansion". I thought it would be a perfect ride for the 3 of us to enjoy together. So, we waited in line for at least 15 minutes, with me carrying Gavin AND his feeding pump and my purse, because strollers weren't allowed....another time that killed my back and neck!.....and when we got up to the front of the line, they told me that Gavin couldn't ride because he didn't have socks or shoes on his feet! I would not have cared, except there was a guy at the entrance of the ride and I thought that it would have been nice of him to tell me this before I stood in line for 15 minutes, holding a 30 pound child plus the other items! UGH! I asked if they could make an exception, because I didn't even have shoes or socks for Gavin that day, because it was so hot and Gavin can't even stand up anyway! They said "No Way!" I was quite irritated by this! I had just stood in line with 2 children and I didn't want to let Caleb down either. So, I asked to speak with a manager, who told me that they sold socks in a gift shop for 8-9 dollars and then I said, "NO WAY!", plus I didn't want to wait in line for another 15 minutes, once we bought the socks. I was seriously about to cry when my Momma improvising skills clicked on and I was able to come up with a great idea! I told Caleb to take off his socks and shoes, and then to give me his socks. I had him go sockless in his shoes and had Gavin wear Caleb's socks! They were HUGE on Gavin, but this satisfied the attendant, so the problem was solved! WHEW!

Here is a picture of Caleb and Gavin in front of the haunted house: 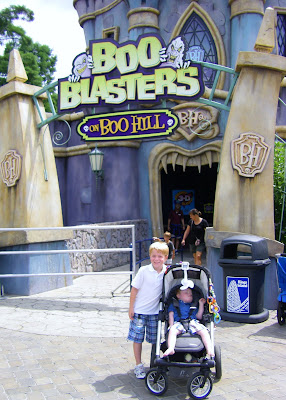 Here is a picture of all our boys together while on vacation.....they were snuggled up on the couch before bedtime and behaving so sweetly.....which doesn't happen a whole lot of the time around here! 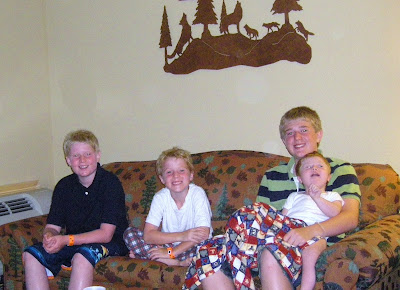 We had a great time away and I hated to come home again, but now that we are home I am loving it!.....Probably because even though life is almost always exhausting with our bunch, it sure is less exhausting at home, than when traveling with all of them!


"And we know that all things work together for good to those who love God, to those who are called according to His purpose." Romans 8:28
Posted by The VW's at 10:47 AM

You are such a good and smart mom! I'm glad you all had a good time. King's Island is fun!

We have a fan similar to that for jax, because he is just like Gavin in that heat is not his friend!!

Good idea with the fan. I would have come unglued on that King's Island thing. You are so good. Glad you are happy to be home and things have gotten back to normal!

So glad things are on the mend. I'm still amazed at how crazy things were when you came home. UGH!

I am laughing about the visual I'm getting in my head of you changing Gavin standing up. But as you said, You did it!

I am so glad that the things that needed fixing got fixed. What a load off your mind that must be!

I admire the heck outta you, Alicia! You (and Joel) are much braver than I. I only have the one kiddo, and even though she is complicated with equipment and supplies, I couldn't imagine bringing three other boisterous kiddos along on a 1200 mile trip!! Congratulations on being one tough Mama!

So happy you all had a great time!

I'm glad things have settled down for you! Your trip sounds like lots of fun with lots of improvising! LOVE THE FAN! I'd love to know where you got it; it would be perfect for Caleb!

Great recap of life.love all the ideas.Love the fan.Really should have gotten Zoey one of those by now since Topamax prohibits sweating!

Had to laugh as you wrote about standing and changing Gavin as that is how I do it 90% of the time.i think I have mastered it!

thank you for the tip on Compleat.I will keep it in mind as we continue forward.Nervous and excited at the same time!